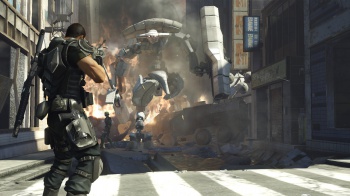 Binary Domain, the recent third-person shooter from the Sega development team responsible for Yakuza, is coming to PC.

According to Steam, the game is due for release on the 6th April and will set you back a paltry $39.99. There will also be a boxed version you can acquire through traditional means, if you're so inclined. As usual, pre-ordering the game on Steam will net you some swag. Namely an extra map, two weapons and a set of retro ninja outfits.

According to a Sega marketing exec, the impending port is the result of Sega listening to fan feedback.

"As well as the excitement generated by Binary Domain in the console press we were seeing increasing numbers of players asking for a PC version. So we listened and we delivered." he said.

Binary Domain, directed by Toshihiro Nagoishi, of Super Monkey Ball and F-Zero GX fame, is a tightly paced, fun shooter with a quirky sense of humor. It isn't perfect - our own Paul Goodman gave it three and a half stars [http://www.escapistmagazine.com/articles/view/editorials/reviews/9454-Binary-Domain-Review] - but it does have a robot with a ridiculous French accent, which buys a lot of affection from me. Unfortunately, much like Vanquish, Sega's previous attempt to break into the third-person shooter market, Binary Domain seems have gone largely ignored both in Japan and the West. Hopefully it'll fare better on PC. I'll certainly be picking up a copy.

Already pre purchased it. I found it fairly awesome and made even more so with Cain, the French combat robot.

I am reminded of an awesome section where Cain is driving a van to elude enemies and drives into traffic.

Dan: "Eyes front! You're going to get us killed!"

Cain: "Oh do not worry monsieur! There was only 64% of collision!"

From what I've seen and from a few reviews, it's not at all that good. I would have been more interested in playing the previous game however.
A

The fact SEGA are putting this onto the PC is warning enough, the beloved console market didnt make enough money so they will try the 2nd class citizenry now and see if they can scrape some more cash out the barrel.

Dont expect a decent port, barely functional game with loads of release bugs and barely any PC options ( FOV ? Wassat ? Theres more resolutions than a TV ? Mouse, bah 360 pad will do ya ? ), and then very little support and lots of DLC... the SEGA way.
I bought into the AvP3 hype and got that game on launch, ignoring all the beta / demo bugs and issues confidant in the game... hah, look at it now.
Look at Shogun 2, bloody DLC for extra blood decals... oh yeah, you can buy DLC to add more blood to your bloody samurai era war simulation.
SEGA loves DLC.

Final whine ( as some of the community call the complaints us entitled PC lot give voice to ), why do publishers think the piracy ridden, insignificant tiny market on the PC is good enough only for releases after the console hasnt netted them millions in revenue ?
Ignore the PC market unless the console markets fails to lap up your latest rubbish then see if the PC lot will sniff at the leftovers ?
Sod off and let the PC developers make PC games, console developers should stick with console titles, not saturate the PC market with console leftovers thereby drowning out the geniune PC titles. 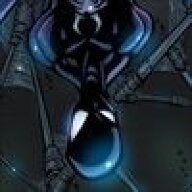 See when I read the title I thought. OH CRAP NEW SUPERVIRUS/LULZSOMETHING GROUP! But it's just about a game...whew...no seriously I was actually frightened for a minute.

Can't really disagree with alot of what you said, but to be fair to Sega, I believe they *had* to charge for the blood decals in Shogun because it changed the age rating on the game.
A

Can't really disagree with alot of what you said, but to be fair to Sega, I believe they *had* to charge for the blood decals in Shogun because it changed the age rating on the game.
Click to expand...

I cant really believe that, I mean if thats all it takes to avoid age rating and certification is to slap the adult content on a DLC wouldnt this been used a lot more often ?
I think rather the rating board will force a product that allowed a DLC that changed the game enough to change rating, to be re-evaluated at the publishers cost... like what happened to GTA:SA when the mini sex game was discovered.

I bought the blood DLC, and there was no age warnings and no age gating mechinisms or anything to prevent a youngster from obtaining the DLC the same way as the rest of the DLC was availiable.

Awesome. Looked good on the 360, but I can never really get used to console controls for shooters.
T

That's $50 if you're in australia. It doesn't look particularly flash from the screenshots, and I'd consider even the american price a bit high from what I can see.

Is it actually any good, or just gears with robots? Cause most of the screenshots were obsured by an overly muscled playable character shooting things.

"As well as the excitement generated by Binary Domain in the console press we were seeing increasing numbers of players asking for a PC version. So we listened and we delivered."

Let me run that through my bullshit filter.....Processing (early 80's computer noises)


"After seeing Alan Wake clean up within 2 days of release on PC, we decided to pay some dudes to do a lazy PC port and make pc-ple feel special with an "exclusive" shitty re-skin so it's not just a port it's a special edition."

For all its myriad flaws, Sega has actually done a fairly good job of keeping a strong presence on the PC.

I wish we could get Bayonetta, though.

Question for those who have played it.
Is story closer to Terminator or to books of Isaac Asimov?
Because I'm so annoyed by stories about bloodthirsty machines.
I'm sick of stereotype that first thing any sentient machine would do is try to kill all humans.
It makes no sense.

FelixG said:
Could ya do me a favor? When its released toss me a PM and tell me how the controls are?

The story looks very interesting but I am slightly worried about how well sega will do with porting controls over.
Click to expand...

I'll make note of it, it wont be for two weeks though. I played the game on the PS3 first, and I have to say that it's well worth it for the combat and characters. Low AA, res and FPS annoyed me a bit though, but that comes with the console hardware.

As far as porting is concerned, I would say Sega do a pretty good job in general. They released Sonic Generations on Steam shortly after the console release and it was fine, though trying to play a 3D Sonic game (Meaning modern Sonic style of gameplay) with a keyboard would naturally be a nightmare.
Show hidden low quality content
You must log in or register to reply here.
Share:
Facebook Twitter Reddit Pinterest Tumblr WhatsApp Email Link
Top Bottom