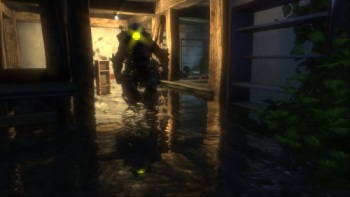 The BioShock feature film has lost its second director and appears firmly stuck in the goo of pre-production.

Take-Two Interactive signed a deal to do a BioShock feature film almost four full years [http://www.escapistmagazine.com/news/view/83749-Take-Two-Signs-BioShock-Movie-Deal] ago and while that may not be a terribly great span in the world of the Hollywood film industry, it is an awfully long time for almost nothing to happen. Which I suppose isn't actually the case for the BioShock movie, because something has happened: It's now lost its second high profile director.

Juan Carlos Fresnadillo, the Indiewire [http://www.amazon.com/28-Weeks-Later-Widescreen-Edition/dp/B000TJBN80/ref=sr_1_2?ie=UTF8&qid=1332780511&sr=8-2]. "Right now it's on hold. The studio and the videogame company, they have to reach some kind of agreement about the budget and the rating."

For entirely new setting [http://www.amazon.com/BioShock-Xbox-360/dp/B000VKC6LU/ref=sr_1_5?ie=UTF8&qid=1332780601&sr=8-5], rendering the film, at least as it was originally envisioned, increasingly less relevant and able to capitalize on the excitement generated by the game. It may yet happen but at this point, I sure wouldn't hold my breath.

OT: Also this movie will never happen and if it does it will suck.

An agreement about the rating? A Bioshock movie would have to be rated R, unless they bowdlerize it to the extreme. If this does wind up getting made (unlikely) and I see PG-13 slapped across the title, then no. It wasn't worth it.

I really wanted to see this movie happen but I gave up hope a couple of years ago of it ever seeing the light of day. To be honest it probably would have never been as good as the game as the whole "would you kindly" reveal would have to modified a great deal to work in a film setting.
J

I'm betting that it's because the Studio wants to make it PG-13 and Irrational, wants to go with R, like the setting deserves and kinda needs.

how bout not making another shitty video game movie? you know, cause they ALWAYS are shitty.
L

Fan-flaming-tastic. The imbeciles in suits can't agree on the rating to give to the movie of one of the best games in recorded history and get in such heated pissing contests that not one but two directors back away from the project because they've been waiting years for said imbeciles to realize that you cannot have people injecting themselves with things and show little girls in dirty dresses drinking blood whilst keeping a PG-13 rating. It's not gonna happen.

"Oh, it'll cost $160 million to make it! We could never possibly recoup that kind of investment! Make it cheaper! Make it overseas, somewhere they haven't heard of movies! And make it nice and safe for the kiddies so they can see it too because there's no way adults could possibly want to see a movie in the theatre!"

No, that couldn't happen, could it? Disney put out the Prince of Persia movie in 2010 at the height of a recession. Investment: $160 million. Domestic box office returns: $335 million.

No, video game movies don't make money, do they? They're just big yawning cash pits that drain studios of their resources, preventing them from putting out good movies like...hmm, give me a minute, I'll think of one...ah, fuck it.

So, a hearty heigh-ho fuck yourself to you, Take Two Interactive, with additional digital salutes to you, Paramount. You managed to mangle and soil what could have been a beautiful movie. May you rotate happily on your bloated thumbs and continue in your quest to bury consumers under a rain of dross.

What? That's still going? I though that had been abandoned ages ago. It's good to see they've made a lot of progress since then.

Ah well, I'm pretty sure the film would be terrible when compared to the game anyway, as they usually are, only this time they'd be butchering an IP that actually has a story and world that's actually worth a damn. (seriously guys, the Mario movie didn't butcher anything, there was nothing to butcher, Mario's gameplay is good, the story is practically non-existant. Stop going on about it.)

Bioshock is not a good game to make into a movie. Not least because a big part of Bioshock's genius was in that it integrated traditional gameplay into it's story with the whole 'would you kindly' thing, making the highly linear story actually a part of the plot. A movie would have none of that, and in so doing it would lose Bioshock's big twist.

Why do people keep doing this?

I completely forgot that they were making a Bioshock movie, and I think they should forget about it too so we can all remember how great that game was and not have someone mention right afterwards, "Yeah, and not like the movie."


PrinceOfShapeir said:
Bioshock is not a good game to make into a movie. Not least because a big part of Bioshock's genius was in that it integrated traditional gameplay into it's story with the whole 'would you kindly' thing, making the highly linear story actually a part of the plot. A movie would have none of that, and in so doing it would lose Bioshock's big twist.

Why do people keep doing this?
Click to expand...

That's what's still bugging me about the whole thing. Bioshock isn't the best game to make into the movie, and a lot of the nuances of the game will be lost on a good portion of people, so why this game is beyond me.
T

PrinceOfShapeir said:
Bioshock is not a good game to make into a movie. Not least because a big part of Bioshock's genius was in that it integrated traditional gameplay into it's story with the whole 'would you kindly' thing, making the highly linear story actually a part of the plot. A movie would have none of that, and in so doing it would lose Bioshock's big twist.

Why do people keep doing this?
Click to expand...

Yes and no, the "would you kindly" thing was just a piece of narrative that had no real gameplay effect, it was an interesting story twist however.

Truthfully Bioshock is kind of shallow when you get down to it, and I think it's definatly summer popcorn flick material. It was the kind of thing we don't see often with video games, but overall it wasn't anything all THAT special.

I can see the issues at work though, the entire game is more or less an "M" rated left wing political rant, full of disturbing little girls (including the potential murder thereof) grotesque medical experiments, and things like bombs in baby carriages.

Movies tend to show more than video games, and you do some of those scenes in a movie and your heading definatly into horror movie territory, and the gore and "WTF" factor is going to drive away a lot of casual movie goers as horror is a niche genere. Producers probably don't want to assign a huge budget to a movie like that, even if it would wind up requiring a sizable one to do well. Lowering things to a "T" or PG type rating would get more producers on board, but would probably involve removing nearly all of the horror aspects from the storyline and turn it into an explosion-fueled action movie.

The way Bioshock walked the line between action and horror is probably a very big deal, and a director can't begin working on doing something like this right until he knows what he has to work with and is given an actual script.

To be entirely fair I'd probably pimp the idea of doing this to HBO as they tend to be willing to work between the ratings, and have been known to give fairly high budgets to odd productions. It might fair better as a "big time" TV movie or small mini-series than it would as a theatrical or direct to DVD release.

Yet another reason the movie ratings system needs to just be abolished: Hollywood has turned it into just another marketing angle.

Nobody wants a PG13 BioShock, you dumb fucks! It's supposed to be horror! Those producers need to get this through their thick skulls.
Now I wouldn't mind this movie never seeing the light of day, as I don't think Bioshock really can be turned into a good movie without some heavy changes - which I am heavily against, to me a game-based movie needs to tell the same story of GTFO. Since Bioshock has a mute protagonist, they would need to create a whole new character for the movie, and that's a no-go for me.

Why do they keep wanting to make video game movies anyway? Video games do not have that clever of plots as a general rule.
O

I don't want to see a film. It would be terrible, just like every other video game movie. They'd have to make Jack speak, which would kill the atmosphere. The only way this could be done right is by a low budget student film crew who understood the difference between games and movies.
F

At this point just say fuck it and hand the controls over to Uwe Boll, there's no way the thing will be anything but a disaster at this point anyways, might as well give it to someone who can actually complete it

Uhh..this might be a good thing. I see them taking the Silent Hill route with a movie rater R: Toss Pyramid Head all over the place to remind people it's an R rated movie, add a thin plot and tons of blood. However, if a good director were to pick up the project...well, one can only dream.

On the same note, a well-developed PG-13 movie could work. I don't know why I'm thinking of Deathly Hallows; a movie that's still PG-13 but it's very gloomy and dark.