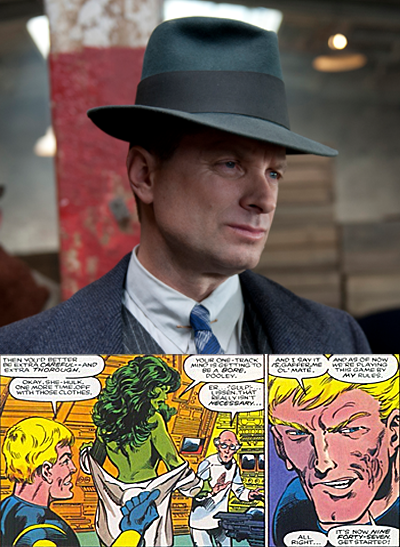 Whigham will portray Strategic Scientific Reserve Chief Roger Dooley, who is in charge of the division where Carter (Haley Atwell) and the other characters are based out of. Set several years after the WWII-era events of Agents of S.H.I.E.L.D's [http://www.escapistmagazine.com/videos/view/escape-to-the-movies/3749-Captain-America] second season.

Of note: A Roger Dooley actually these bizarre events [http://www.marvunapp.com/Appendix/cockrchs.htm#Roger Dooley] that She-Hulk was exposed to radiation that temporarily rendered her unable to revert to her human form of Jennifer Walters (she didn't really care.) Given the WWII-era setting and the lack (so far) of an existing She-Hulk in the Marvel Cinematic Universe, it appears unlikely that Carter's Agent Dooley will follow the same path here.

Agent Carter will air on ABC beginning in January of 2015.