Well, Randy Pitchford certainly owes us a good game... And I'm getting an increasing premonition that Battleborn isn't going to be it, soooo...

And more over, said villain killed my favorite character in the series. So him and I are not friends.
Click to expand...

Yeah. I feel the same about Bloodwing. Poor little guy. I shed a few tears when his head stopped being attached to his body. Mordecai took it pretty hard. Tiny violin was consoling.

Oh wait. Maybe you're talking about the Meriff. My bad. 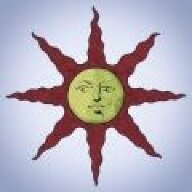 Part of me is interested to see if they're actually able to save the franchise, but all the rest of me won't even consider picking it up until I can rent it from Redbox.
G

How are they going to top Handsome Jack?

Character creation would be neat. What I hope they bring back is the Weapon Grinder. Being able to 'make' new weapons out of old ones was a very useful mechanic, and I'd love to see it return.

My point is I hate multiples of the same specific character. Its why I hate this character roster obsession in games like Battelborn and Overwatch. Even CoD is getting in on this trope and I'm not into it.
Click to expand...

While I agree that the character roster is usually incredibly annoying Borderlands art style kind of makes it pretty big in cutting down on work.

The biggest problem is getting the voice acting and body types for character creation. The art style of borderlands makes it much harder than games with a more realistic art style. like in TF2 voice acting also plays a part in identifying what role a player has which can help in gameplay, though nowhere near the same extent since it's a co-op game and thus you aren't going to stop and wait for an enemy heavy to come around a corner when playing as a scout. While BL2 had the same characters you could customize their heads and they weren't named anyway.

Then there's clothing, you have to make different versions of the same clothes not just for both sexes with resizing for different species like Skyrim, but for different body types. The muscular, the thin, the fat, the tall and the average. That's a lot more work due to the art style. And you still have to make all of it different from the enemies body types and equipment.

And then there's the classes in co-op. In BL2 you can look at a character and say "yep, that's the team siren", "there's our generic soldier class" or "there's our team sniper". Not so much with completely custom characters.

So while character customization sounds good on paper I'd rather they deal with gameplay issues like the pacing, the enemy AI (alright, but not great), classes, etc. To be fair in BL2 you could already customize the characters to have different heads and completely custom characters does sound like a logical step up, but first I'd rather have something like multiple active abilities than a virtual paper doll I'm not even going to be looking at anyway.
Click to expand...

I don't need a lot of voices. And characters can still be identifiable. Just make your customization based on class. Id imagine classes for Borderlands would be Soldier, Rogue, Siren, and Big Guy. Likely make each have variety to become more similar to Mordicai with sniping abilities, or Zero with stealth for the rogue, Siren can be more like Lilith, or more like Maya, etc. Based on class determines body type and the style of your customization. Id imagine if Team Fortress did it that way it could work too. Medics choose from medical clothes, scouts all have sports gear and are skinny and short, etc.