Capcom: Monetization of F2P Shouldn't Be "Pay To Win"

Capcom: Monetization of F2P Shouldn't Be "Pay To Win" 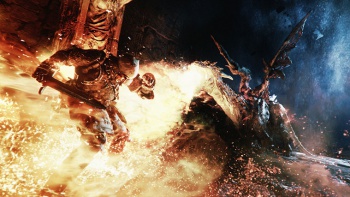 Capcom knows there's a market for free to play games. It also knows the phrase "free-to-play" elicits many groans. It plans to rectify this by making full F2P games that satisfy users instead of losing their interest when content is gated by monetization.

Capcom isn't limiting F2P games to mobile devices either. Deep Down is its upcoming F2P role-playing game for the PS4. Producer Yoshinori Ono is aware of the criticism but believes F2P games can be monetized and provide a fun experience for the player.

"There are some people that see Deep Down being a free-to-play title as a negative thing," Ono said in Famitsu. "The fact that these people exist is a sign, I think, that we in the game industry have failed to produce good F2P games. However, if these people have a good, fun experience with an F2P title, that impression's going to change."

Capcom's Motohide Eshiro, producer of Phoenix Wright: Ace Attorney: Dual Destinies, said, "I think a pure 'pay to win' strategy leads to nothing but dissatisfaction." F2P games in their monetization structure alienate potential players and shorten the lifespan of the games. If players cannot access additional content relevant to finishing the game, many will stop playing it.

Eshiro also worked on Blade Fantasia, an RPG released for iOS in Japan. The game is free-to-play other than monetization of character upgrades. From his experience with Blade Fantasia, Eshiro believes game developers can monetize content that players want after release and will "gladly pay the market price for it. That was key to learn."

Eshiro sees tier-based payments as a future mainstream approach to monetization. One tier will have no monetization, and players will be able to play the game with no problems. Additional tiers will be for people who are willing to pay for content they like.

"Having a game design where users can decide which tier is right for them is an important aspect in getting people to play longer," Eshiro said, "and securing that allows us to provide better service."

But capcom has no problem doing it for the games it actually sells, because paying them $60 means you probably have more they can leach you for.

So Capcom, what you're saying is the thing that you have done (IN SPIRIT, but you have fucking done it, and made people pay for it first as well) and previously had no problem with that is causing you to loose money and fan loyalty and stagnating all your brands is suddenly NOT a good thing?

There is not a large enough 'Cage-You don't say' image file on the internet.

And you had to LEARN that? What learning how to smack your monkey that runs the marketing department around the chops when he makes damaging, short term, money grabbing decisions that'll jeopardize the future of your company is a fairly solid thing to learn as quick as you can I'd say.

roseofbattle said:
"There are some people that see Deep Down being a free-to-play title as a negative thing," Ono said in Famitsu. "The fact that these people exist is a sign, I think, that we in the game industry have failed to produce good F2P games. However, if these people have a good, fun experience with an F2P title, that impression's going to change."
Click to expand...

The idea that maybe they can market a positive experience gets a cynical "ha!" from me.

I don't think F2P is actually bad, but I think that Capcom has shown itself to be just like any of the other major pubs in that they've demonstrated that they will put profit before user experience every time.

It becomes really hard, then, to imagine a scenario where they would do the exact opposite of what they've been doing.

In short, this sounds an awful lot like hollow marketing claims, nothing more.

In fact, it sounds a lot like the whole "the only reason you hate the Xbone is that we failed to explain how awesome daily checkins and used game restrictions are" redux.
T

I don't care about F2P on Deep Down, after the gameplay reveal videos from TGS I won't be touching this title until they majorly change the combat, or at least reveal new mechanics. Repeatedly stabbing trolls with the same attack in dark corridors is a lot less fun than the epic dragon fights with proper fire simulation that they promised at E3.
S

This is quite hypocritical when, if I recall correctly, in Monster Hunter Frontier you can purchase armor sets, weapons, and premium only buffs.

Correct me if I'm wrong on that.

I must wonder if theyre only changing thier stance now since theyre releasing a major F2P game and not just a licensed iOS game.

Regardless, they can talk till theyre blue in the face, i doubt anyone here is going to believe them until they do it.

Capcom doesn't believe in pay 2 win but they sure as heck believe in nickel-and-diming your for every single piece of content in the game. It's really hard to believe anyone from Capcom can even say that they're trying to rectify the whole black mark in the F2P world of paying money to access gated content when their name is pretty much synonymous with gating content behind cash walls.

They talk the talk and I want to believe they'll walk the walk on this one, especially with Deep Down but their history with DLC and use of in game purchases worries me slightly.

I want to believe in you Capcom, don't disappoint me.

I somehow doubt that a company that can't get the traditional payment scheme right in terms of not treating your customers like ass will be able to handle F2P graciously.
T

... sorry, I couldn't say that with a straight face.

Putting a pay to play gate on content is a bad idea. I think it really hurt DDO in the long run when it was done there.

Pay to win can be avoided. You just have to balance the idea of farming vs paying. People who spend money often work and thus have less time to farm. Students have more time to farm, but are broke. Balance things according to this model and you should be ok. Gating content though, just makes the "farming" population walk away when they finish the available content. Since they are about 70-80% of the server population, that kills the game.
I

Wow, who would have thought people would be more willing to pay for a game that they were enjoying, rather than to pay for a shit game to maybe make it more interesting? The same applies to pay to win.

Funny how the old piracy excuse, "I'll try it first and if I enjoy I'll pay for it" really applies here. People aren't going to pay for a bad experience they already have access to. It's as simple as that

The only time where selling game changing mechanics are acceptable are in cases like TF2 where the weapons are balanced out (...mostly anyway, I suppose, the Sun on a Stick is still a piece of trash) and you can get them for free through play time anyway or even trading.
J

Seriously, they have NOTHING credible to say on the topic of game payment structures until they clean up their act and apologize for past conduct...
C

Capcom is a weird one to hear this from. I think this press release might have been kidnapped from the happy home of Riot or Valve.