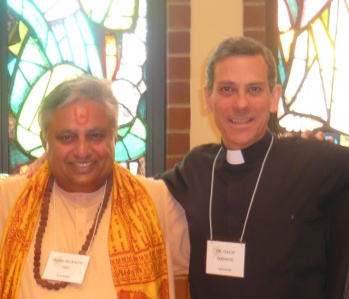 Hindus aren't the only ones annoyed by Smite's portrayal of the goddess Kali.

A few weeks ago we learned that the Kali [http://www.universalsocietyofhinduism.org/usoh/] "trivializes" the standing of these Supreme Beings in an unacceptable way. In a pleasant example of inter-faith cooperation, a Roman Catholic leader from Nevada has now urged that spiritual people come together to stop Smite from making a mockery of divine beings.

The Nevada-based leader in question, Father Charles T. Durant (pictured, right), is very clear on where the nation's believers should stand in this debate. "Respect for religious practice and beliefs is a basic tenet of our land," he said in a statment.

"When using religious images in commercial media basic respect calls for understanding the teachings behind those images. This need is only heightened when using a religion's supreme images. I would hope that understanding and respect will bring a mutual agreement honoring these Hindu concerns," concluded Durant.

In addition to this, the Universal Society reports that it has also received support from an American Rabbi, who called on Smite developers Hi-Rez Studios "to avoid trivializing the deeply held beliefs of Hindus by changing the product accordingly." Commenting on the issue, Buddhist Reverend Jikai' Phil Bryan added, "Shame on the game-makers for denigrating these Supreme Beings."

Hi-Rez Studios has yet to comment on the issues beyond saying that Smite will continue to expand its use of religious pantheons once it escapes it current beta status. It's an interesting debate: Does the fact that a game reverses the virtual relationship between believers and their gods mean that it is inherently disrespectful? Will players actually learn anything useful about various faiths from such games? Time will tell, but for the moment, the Universal Society of Hinduism and its multi-faith friends know exactly where they stand.

oh now i definitely hope they include the abrahamic god and include allah incase the muslims wanna protest too.

I... I feel so odd about this. On one hand, people of different religious beliefs are respecting one another. On another hand, they're trying to force a piece of media to not be made, which I am definitely against. I just don't know whether I should be upset or pleased.

Cry more, silly religious people. Cry more and then realize that you're taking it way too seriously. Then dial it down a little bit and play Smite. I promise, it's fun. Slaughter Ra while playing Kali, if you really must.

Honestly they can't do shit to stop the developer. Their best bet is to appeal to their communities and urge people not to play it.
D

Sorry for being ironic, but Jesus Christ! There have been worst depictions of religion in videogames before. I'm actually part Asatru, and I enjoy seeing Odin kicking ass. Seriously, get your religious relic out of your butts and allow us to enjoy games. If they get away with any form of banning of this game, they might be givin leverage to change more. All it takes is an excuse for some groups.

They're just upset because someone finally decided to put the "Whose god is better?" question to the ultimate test - hand-to-hand combat.
R

felbot said:
oh now i definitely hope they include the abrahamic god and include allah incase the muslims wanna protest too.
Click to expand...

To be fair, a lot of christian, muslim and jewish religious figures would just not be that good for this kinda game. Most were just humans who received temporary powers.

Angels could work I suppose. Go kick some ancient ass as Michael or Gabriel.

Seriously though, if Smite offends these guys, their heads are going to explode whenever they find out about the Shin Megami Tensei series. lol

I'm glad that Religion can't invoke copyright laws.
The main offence I'd take if I was religious is that some creepy Kali rule 34 will probably result from this.
G

All I have to say is Lol, Religion.

Oh dear... someone is upset that their fictional character is being used in another story. They should probably sue for violating copyrights.

Also, aren't they late to the party? What about Shiva and Quetzacotl? No one was bothered by their use in Final Fantasy 15 to 20 years ago.
1

felbot said:
Seriously though, if Smite offends these guys, their heads are going to explode whenever they find out about the Shin Megami Tensei series. lol
Click to expand...

Oh I had a good laugh when I read that.

But seriously people stop being butthurt over a game. First of all it's not slandering your religion it's just using figures as heroes. Second of all your religion is not protected from slander.

I can say anything I want about it whenever I want to. So please, go cry in the corner silently.
Click to expand...

Revnak said:
I... I feel so odd about this. On one hand, people of different religious beliefs are respecting one another. On another hand, they're trying to force a piece of media to not be made, which I am definitely against. I just don't know whether I should be upset or pleased.
Click to expand...

The only time people of different religions seem to get together is to hate on something.

What about Tibetan Buddhists ?

After watching Baccano!, I can now turly appreciate your avatar.

Its good to know that religions can put aside their differences to protest against video games. Truly this is a sign of future peace between theologies.

Note: I don't hate religion, I just find it funny that this is what they choose to unite against.

I get a weird "forcing beliefs on people" vibe, just what exactly do they want?
Call me silly but I just don't understand what is so offensive, what effect or impact on anything does the playable nature of their gods have?
It wouldn't be a bad idea to include a sort of encyclopedia to the game but I don't really see any other kind of compromise being made.

I'm quite surprised at the response of Abrahamic faiths coming to defence of the depiction of Hinduism's pantheon, seeing that their holy scriptures down right accuse polytheistic faiths of being heretics. At least stick to your outdated/ridiculous beliefs people.

I mean honestly, why should Hindus get preferential treatment? Many different religions have had their Gods and/or prophets trivialised, I mean look at Jesus, he's on South Park, Family Guy, freakin' bumper stickers for Christ's sake (pun intended). Not to mention Too Human, God of War, Asura's Wrath, Darksiders, Dante's Inferno etc.

People need to learn that nothing should be off limits.

Hevva said:
Does the fact that a game reverses the virtual relationship between believers and their gods mean that it is inherently disrespectful? Will players actually learn anything useful about various faiths from such games?
Click to expand...

Short answers: No, and, No.