Cognition Makes A Leap To The iOS Store

Cognition Makes A Leap To The iOS Store 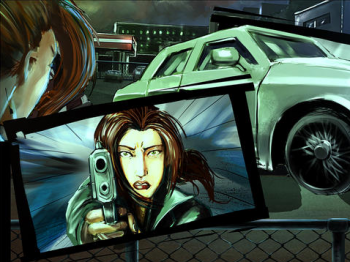 Back in the mists of time, Cognition: an Erica Reed Thriller [http://www.escapistmagazine.com/news/view/113983-Jane-Jensen-Returns-With-Cognition] was a successful Kickstarter, and launched its episodic mystery goodness in 2012. Now it's going one step further, and launches for tablets on the iStore today. Want a shot at creator of Gabriel Knight Jane Jensen's latest? Fancy a go inside comic artist Romano Molenaar's world? Then head on over to iTunes for episodes 1 and 2, or - if you're a Mac gamer - pick up the first three epsidoes on the App Store for $7.99 a pop.

You play as FBI agent Erica Reed, who has a curious trick up her sleeve: the ability to see brief glimpses of the past. Now the serial killer who murdered her brother three years ago is back, and Reed had better use all the skills she's got if she intends to escape the bullet-ridden future fate seems to have planned for her. Each point-and click episode is self-contained, but also advances Erica's story, with a touch of paranormal horror. Is there a grand finale due? Why, yes there is, in September 2013.

If you're looking to pick up the iPad versions, the Mac store [https://itunes.apple.com/app/cognition-episode-1/id598738593].

It has finally been Greenlit on Steam on 28 June, so should appear there some day soon. For us Windows gamers.

Congition is easily one of the most clichéd, shallow and pedantic adventures I play in a long time.
The serial killer story is so old-fashionly worn out, you smell the dust of the years it lay in an FBI archive.

I can live with the unnatural facial lightning and chara-animation and it held my attention until I was through with the available episodes, I have to give it that but only to see if this goes somewhere interesting - it didn't and I don't care how it ends.