Dandark said:
That would be Gundam 00.
OT: I see there are plenty of people who defend origin by saying Steam was or still is just as bad. Tell me how that excuses origin? At least with Steam it already has my trust and has a much bigger game library for me to choose from with regular sales.

What does Origin have to make me choose it over Steam. Origin is not the worst system ever, but it's also not very good. I personally like Steam and hold them in high regard. I already have a bad opinion of Origin because of the controversy surrounding it about privacy polices.
They fixed all that im sure but that doesn't really give me much confidence in it. It's also made by EA who I already have a dislike for.
Even if I didn't already dislike EA I would of heard bad things about them since they have such a bad reputation. So I ask again what reason is there for me to stop using Steam, a popular and generally trusted program that I already use rather than Origin, a new program several updates behind steam that has already suffered from contraversy and is being put out by EA who have a dubious reputation.
Click to expand...

Also, I agree. People should not make excuses like that for origin. "Steam used to suck" is not a valid argument for why origin sucks NOW. EA should have had plenty of time to learn how to do it right. But they didn't. 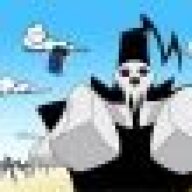 i agree with you on the terrible EULA...


speaking of which, the first time i heard of origin was because was because of them using origin to spy on you... talk about bad press right off the bat
X

If Origin does not change their ways to at least MATCH Steam and what they can do then what's the point? I predict that Origin is going to die a very slow painful death.

I know it's a horrible waste of internet space. I know it's borderline stalker creepy. I know there's no reason for it to exist. I know it works about as well as wiping your face with sandpaper, but I promise to lay off once Mass Effect 3 comes out. I think. Dragon Age 3? Come on! I have to know how the story ends!

Maybe after that Bioware can partner with a more credible source and I can throw my money guilt-free. The people behind the Portal 2 ads sound like upstanding publishers.

DTWolfwood said:
they offered all of their previous valve games in 3 simple packages to get your Steam library going. Its too long for me to remember the exact specifics, but valve offered something like the Gold, Silver and Bronze packages. for something like $60 it included, HL, HL2 and episode1 , Richochet, Team Fortress1, Day of Defeat and DOD Source, Counter-Strike and CS Source, that single player CS (blue something). if i miss something i forgot. So yes they are doing the same thing as EA, except they seem to be giving the customers more options to start with and use steam. Where as EA just seems to want to strong arm ppl into using Origin.

is EA going to give BF3 away for free so ppl would want to use Origin? You know like how Valve gave TF2 away for free after about a year of its release.
Click to expand...

Lets do this point by point shall we?

They offered none of those packages upon Steam's startup. Especially considering half the games you named weren't out when Steam originally came out (HL2 and episode 1, episode 1 didn't come out until 3 years after Steam's launch, HL2 a year later. Day of Defeat a year later. DoD Source just came out last year...)

The Orange Box was released in 2007. Four years after Steam's launch.

But you're expecting EA to give away one of it's biggest releases of the year a few months after launch? I don't think you'd make it in the business world, guy. I really don't think you can compare TF2 and BF3 in terms of budget and all that. Not everyone can have Valve's lax release deadlines.

Anyways, back to the original point, Steam did none of this when it came out. When it came out and even now, it's just DRM. And this coming from someone who greatly enjoys Steam sales and Valve games. They're great, but people who want to damn Origin for the same crap Steam does are ridiculous to me.

"Derp I have to use Origin it to play EA games!" So? I have to use Steam for games that aren't even made by Valve these days.
Click to expand...

I did not use steam until they decided to sell accounts with those package deals. Had it not been for that i never would have tried steam. I wasn't a fan of HL, I only cared about the mods. So when HL2 came out i really could have cared less about it. Also when i was told it was steam required i had the same knee jerk reaction i have to Origin. No sir i do not want. But Valve decided to give out a bunch of their old games in a bundle for a price i felt was fair. So i took a leap of faith. Then the fact that Digital download of the game was so convenient, they got me hooked on the idea. Then there was the sales they did. I started to impulse buy games. So they got me invested in the system with deals and convenience. Not because they had a game I desperately wanted.

I see no particular fault in their (EA) line of thinking in holding a much anticipated game as hostage to Origin. My grip is as Shamus said in the article there is nothing Origin offers that makes me want to use it. And as I no longer have the same hype i had for ME3, and i already have BF3, Origin is useless to me. It turns on only when i want to play BF3.

I am aware that Steam is DRM. Its tolerable to me because i was never booted from my game when steam crapped out on me. Not to mention the fact i could play games i have installed in offline mode. So when EA decides to build in that little feature in to Origin i would see it in a better light as well.

Particularly speaking, if i have a game that uses Origin y would i be so object to getting another game that uses Origin that i want to play? My answer is simply I hate to have games spread over different Digital Distribution accounts. I own the hard disc version of BF3 (not that it matters tbh seeing i had to lock it with an Origin account.) It's the main reason i don't use GoG, D2D, Gamersgate, etc. I would just like the option of having all the games everywhere so i can choose to stick with one platform of delivery and not have to use a bunch. I am a man that is willing pay extra for the convenience.

That was a well thought out piece that makes a lot of sense. As it stands, I'm not invested in Origin at all. I have the Origin service on my PC. But all the games on it were bought through Amazon digital because I don't trust EA not to steal my games one day.

EA for such a big, successful company has done nothing but make mistake after mistake on the digital market. They seem unable to acclimate to it at all. Their perception is based in the physical world where they have monopolies on popular sports titles and all of these things that prevent competition. Now they are unable to compete in a world where those placeholders do not exist. They are the small dogs in the digital playground, but they just keep yapping away as if they are not. And it only makes people not like them.
Show hidden low quality content
You must log in or register to reply here.
Share:
Facebook Twitter Reddit Pinterest Tumblr WhatsApp Email Link
Top Bottom