DFC Intelligence Takes A Look At The Triangle

DFC Intelligence Takes A Look At The Triangle 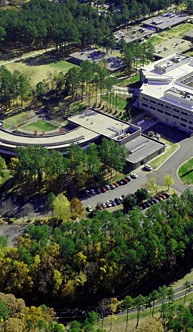 When most people think "game industry," the region that usually comes to mind is the San Francisco Bay Area, but an industry as big and booming as this one can't really be contained in a single region. In fact, there are game industry hubs all over the country, including The Escapist [http://en.wikipedia.org/wiki/The_Triangle_(North_Carolina)].

"RTP is the world capital in game engines, with market leaders including Epic Games, Emergent Game Technologies, and Vicious Cycle," the Triangle Game Initiative told the industry research firm DFC Intelligence in an interview. Epic Games produces the hugely popular Gamebryo [http://www.unrealtechnology.com/] 3D engine has been used in everything from Oblivion to Civilization IV. The TGI also made mention of the region's world leading output of serious games and training and simulation software.

So what is it that makes The Triangle such an up-and-comer? Well, who wants to pay sky-high rent in the Bay Area, right? Sounds like a joke, but it's true. "The RTP area has one of the largest concentrations of game development companies in the U.S., and is a low cost, high quality of life region with home prices that are less expensive than comparable hubs such as Austin, Seattle, Boston, or San Francisco," the Triangle Game Initiative said. Furthermore, the region has been immune to the recent housing collapse, having never gone through a speculative boom.

On top of that, there are numerous schools in the area providing education in game development skills, a well-rounded infrastructure of support services in the area, and, of course, it's convenient for developers to have the company they licensed their game engine from just a short drive away.

The creator-focused culture of The Triangle may be one of its greatest assets, however. "RTP is developer-centric rather than publisher-centric," the TGI said. "This is a place where real innovation in game creation happens, not where it gets farmed out from."

I live in SC. Maybe I should move up north and hunt for a job. Ahm comin fer you Keane!

TsunamiWombat said:
I live in SC. Maybe I should move up north and hunt for a job. Ahm comin fer you Keane!
Click to expand...

You're gonna have to come to San Francisco if you wanna get at me. But everyone else pretty much is fair game.