Dracula Meets Dice in Fan Made Castlevania Board Game

Dracula Meets Dice in Fan Made Castlevania Board Game 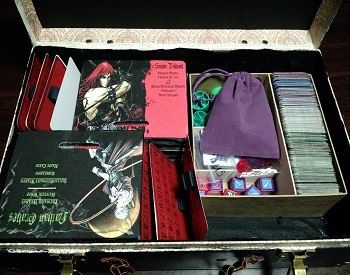 Redditor XsimonbelmontX has released a gallery of images showing off his completed custom Castlevania board game.

I'll fess up to not being an extensive player of platformers. That being the case, I've had something of an addiction to <a href=http://www.escapistmagazine.com/tag/view/castlevania>Castlevania ever since I first played the Game Boy Advance port of the original NES game a few years ago. You can perhaps understand then, why one Castlevania fan's <a href=http://www.escapistmagazine.com/news/view/137917-Artist-Creates-Spooky-Castlevania-Themed-SNES>custom made board game adaptation of the long running franchise makes me smile so wide.

The creation of Redditor, XsimonbelmontX, the game in question, simply titled Castlevania, draws elements, characters and enemies from the entire series and combines them into "a mostly co-op" game that pits its players against a bevy of monsters and bosses. Taking on the identity of one of 11 Castlevania protagonists, <a href=http://imgur.com/a/nsIhS>the game drops players into a board-based version of Dracula's Castle as seen in the original game on the NES. Despite utilizing this classic layout however, the gameplay, according to its creator, is based heavily on the franchise's later Metroidvania iterations.

"The premise basically follows Simon's Quest, but includes characters from throughout the series," said XsimonbelmontX. "Dracula has been killed, but all of the players are cursed and slowly dying. Every time a player is killed or if a card is drawn that passes time, there is a curse counter that advances. In order to win, everyone has to work together to fight their way through the first 5 levels, fight each level's boss to collect the 5 parts of Dracula's body, then all 5 parts need to be brought to the tower to resurrect Dracula and break the curse, and then proceed to kill him again."

Accomplishing this goal involves a lot of combat against a roster of "roughly 100 different monsters." After defeating a certain number of monsters, a player's character levels up. This, in turn, gives them access to new upgrades (about 10-15 total per game) based on items, sub-weapons and abilities taken from the games. Many of the abilities are notably unique to their individual character. And if that doesn't sound like something that would add up to a lot of replay value, the game also currently features 30 boss characters that are selected randomly for each playthough.

All in all, the only bad thing I can see about this game is the fact that it's just the work of a private individual and most likely won't be seeing much in the way of a wider distribution thanks to obvious licensing issues. XsimonbelmontX has expressed in a Reddit comment that he's "considering" releasing the game as a free download, but there's no telling if he'll actually go through with it. Here's hoping that happens. In the mean time, you should also check out the excellent Fallout Monopoly he unveiled last year. If you haven't already seen it it's worth the gander.

This looks amazing. Someone please buy this and get it licenced. Im currently throwing money at the screen but nothings working.

bjj hero said:
This looks amazing. Someone please buy this and get it licenced. Im currently throwing money at the screen but nothings working.
Click to expand...