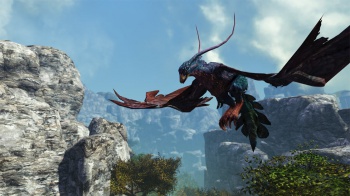 Dragon's Prophet isn't just about capturing dragons like they're Pokémon, but training them in specialized skills as well.

Online games have been around since the birth of the internet, but now that free-to-play titles exist, we have more options than ever before. That's a good thing, although sometimes it's difficult to do something unique for the medium, especially in the well-established fantasy genre. Senior producer Todd Carson is keeping that in mind for the upcoming Dragon's Prophet MMO, <a href=http://www.escapistmagazine.com/news/view/120233-Sony-Online-Bringing-Dragon-Filled-MMO-to-North-America>which allows players to build an entire menagerie of dragon companions. In a recent interview, Carson outlined precisely how the game will stand out, specifically the ability to capture and train custom dragons like they're freaking Pokémon.

"As a player you're going to run into several hundred different types of dragons in the world from traditional looking dragons, with four legs and wings, to dragons that look more like beasts," Carson says. "You can capture a dragon and then you can summon it to fight alongside you in battle, you can ride it, you can take that dragon back to your dragon lair and have it harvest resources for you ... You can do that all while you're offline. You can set your dragons to do work like that from anywhere from one hour to 24 hours."

Each individual dragon has procedurally generated stats and skills, providing them with unique damage stats, hit points, intelligence scores, and more. Even better, skills held by one dragon can be taught to others, allowing you to create a custom fire-breathing reptile that meets your particular playstyle. "The idea there is, 'Hey I've got this one dragon I really like but this dragon has ten ability slots open, and I've only got three abilities on him and I've found this other dragon that I don't really care for but he's got this awesome heal ability'", Carson explains. "You try and transfer the skill by having the one dragon teach the other dragon that heal ability. That way you can customize your dragon to what you want it to be."

Carson also details Dragon's Prophet's class system, which includes everything magic-using Oracles, heavy armor-bearing Guardians, and gun-blade wielding Rangers. At the end of the day though, it still comes back to collecting varied dragon types, which reward players with abilities that cannot be earned any other way. If you like the sound of Dragon's Prophet so far, <a href=http://www.warcry.com/contests/register/dragonsprophetbeta>you can grab a beta key here and get started on a specialized dragon army of your very own.

But are any of the dragons as cute as an eevee?

How many dragons can you have in your slave labour camp dragon lair?
I

Something is wrong with my computer screen. I'm throwing money at it but it's just falling to my desk. Maybe if I shove the money into the disk drive... 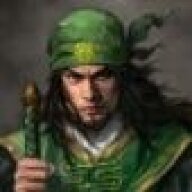 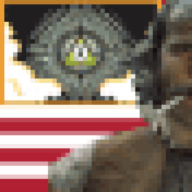 itsthesheppy said:
Something is wrong with my computer screen. I'm throwing money at it but it's just falling to my desk. Maybe if I shove the money into the disk drive...
Click to expand...

Don't! Everyone knows the disk drive is only for change. You need a floppy drive to put in paper money, you know, coz of floppy money.

OT: This actually looks like it can be fun, although the article didnt go very much into the online aspect of the game and the Nazi camp I work at blocks "gaming websites" (somehow this one doesn't count as that) so I can't look further into it right now. Sounds like a beta key is going to be aquired once I escape from this place.

This game sounds interesting...
I might want to try it...

Ok, why is this the first time I have heard about this game?

That concept is something I had dream about when I was a kid (I always wanted to create my own dragon) which I guess is now a reality! Now I'm hoping the game doesn't suck!

Nothing to see here. The game is just as bland of a WoW clone as any.

Naqel said:
Nothing to see here. The game is just as bland of a WoW clone as any.
Click to expand...