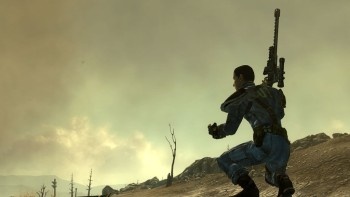 In a new interview, Fallout 3 DLC Lead Designer Jeff Gardiner talks about what players can expect from the game's upcoming new content and how the team has integrated it into the game.

In Operation: Anchorage, the first of three new add-ons coming for Fallout 3, players will take part in a simulation of the liberation of Anchorage, Alaska, from the Chinese Red Army. The mission will take place in a simulator much like the one encountered in the game's main quest, placing the player in an entirely new environment without actually leaving the Capital Wasteland. And, like that first simulator, players will lose their equipment and have to survive within the boundaries set by the simulation's designers.

"The Chinese Red army is everywhere, and the player will first have to secure the surrounding mountain side and then fight their way into the Chinese base," Gardiner told IGN [http://xboxlive.ign.com/articles/937/937202p1.html]. "The player will have to use a lot of their standard combat skills, along with several new tools that will only be available in the downloadable content. These include interactive Strike Teams under the player's command and unique armor, weapons, and other exotic gadgets."

The add-on will focus mainly on combat and stealth, he said, adding that the team is using DLC as a way to "try new things" and insert cool content that they simply didn't have time for in the original game. Even so, he stated that Bethesda [http://www.bethsoft.com] is remaining true to the series' gameplay, saying, "We're trying something a little different with all of our upcoming content so there will be plenty of the morally gray, multiple path quest lines everyone loves the franchise for."

Operation: Anchorage will be available through a new quest objective and map marker that will be accessible at any point in the game, and is estimated at four to five hours in length. New weapons, armor and achievements will be included, as well as a new perk, "Covert Ops," while "animation vignettes" will "make the soldiers and other NPCs interact with the world in better, more convincing ways then anything we were able to do with the Fallout 3 main game."

Gardiner also briefly touched on the other two DLC releases, The Pitt, set in a heavily-irradiated Pittsburgh, and Broken Steel, which will actually continue the main storyline, increase the level cap and add new enemies, perks and other material.

Operation: Anchorage is coming in January 2009 for the Fallout 3 website [http://www.xbox.com].

The PC DLC release will be free, right?
T

GoldenShadow said:
The PC DLC release will be free, right?
Click to expand...

Based on what they did with Oblivion, no, the PC DLC will be available for purchase from their website. The final DLC, which sounds as if it is the largest of the lot, may be released on CD/DVD and may be bundled with the other DLCs (and will, natually have the highest pricetag).

Of course, this is all speculation on my behalf - I suggest you wait until they release it and see.

The nature of Fallout 3, and its similarity to Oblivion may see the release of dev. tools, whihc will make adding material or customising the game a lot more accessible, making player-made mods more in-depth and widespread.

GoldenShadow said:
The PC DLC release will be free, right?
Click to expand...

I wouldn't think so. I'd expect something similar to Oblivion, where content is released for purchase via the Bethesda website. Where PC gamers have an advantage is in the GECK editor, which means that while we'll (probably) still have to pay for official content, we'll have access to endless amounts of free, user-generated content - also much like Oblivion.

As for me, I won't be picking it up until (and assuming) it comes out in a box. I really prefer boxed releases like Knights of the Nine as opposed to individual DLC, and unless Bethesda says it's absolutely not going to happen, I'll wait.

Will this new perk be available for people with the level capped? If not, I will be sad.

A) How do we get to Pittsburgh?
B) What the hell is an "animation vignette?"
A

CoverYourHead said:
Will this new perk be available for people with the level capped? If not, I will be sad.
Click to expand...

I would assume it's a quest perk like Wired Reflexes. Do the quest, get the perk.

CoverYourHead said:
Will this new perk be available for people with the level capped? If not, I will be sad.
Click to expand...

Alex_P said:
I would assume it's a quest perk like Wired Reflexes. Do the quest, get the perk.

All the DLCs will most likely be standalone, but not conflicting. So if you get a DLC which has a perk added, but doesn't raise the level cap, you'll be able to get said perk.

If you get a DLC which raises the level cap and adds a perk for a level currently unattainable, you won't be able to get the perk without getting to said level or cheating.