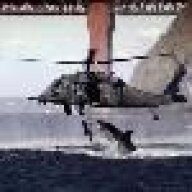 as hard as i try, i cant feel sorry for the french despite how horrible this seems, i just cant...

on the plus side ill have fewer frogs pissing me off over vent in the future though, i just cant stand the accent

AGH! Why is it always like this? Can't we have our most basic of human rights back so we can live?

France isn't a free democratic nation, quite the opposite, they just think they are. This was pointed out rather powerfully during the "Oil For Food" scandal where it was outed that France opposed the war on Iraq/War On Terror because it was breaking sanctions and using that program to trade with Iraq illegally and making massive bank doing it.

When this was outed, the news was covered VERY differantly in France for a long time, and even now a lot of French people really don't "get it".

That is not a free or democratic nation.

As *I* read things the general plan seems to be for them to handle things autonomously. The idea being that if your "caught" pirating something they automatically send you mail. BUT on the third offense they contact a judget who looks at the evidence and makes a desician and takes action. Thus basically you'd simply be cut off and then be informed that the goverment decided to remove you from the Internet. Probably with an appeal process in place.

If not how they intend it now, that's where I see things going for the ease of enforcement.

This also means that it would be very easy to frame people online and such, and you can pretty much guarantee if the goverment is shutting people off from the internet, /B/tards, Anonymous, and other groups are going to jump all over it for pure chaos potential.

At any rate the basic ruling is very French. We simply give France waaaay too much credit for being a free and progressive country. It's bad enough that the people buy their own hype without us feeding it as well especially given examples like the one I listed (which have nothing to do with this, but merely show France's true colors).

Besides isn't France already involved in limiting information coming into the country for reasons of "cultural preservation"? I've read some things about their policies on movies and TV shows and how much American/foreign material can be shown per French creations to avoid losing control of their media. Not to mention the whole thing with Madonna's metal covered "Sex" book. Allegedly stopped as "smut" but loled at because France was concerned about it being *American* smut, since France is one of the globe's biggest smut factories.