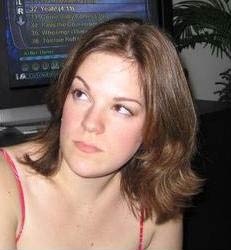 Around here, we call her Bosslady, but on the masthead she's Executive Editor of The Escapist and her brand of journalistic integrity and spirit colors everything we do.

Gamecritics.com a silly man with an English accent [http://www.gamecritics.com/interview-with-julianne-greer-executive-editor-of-the-escapist] is a good kind of person to have around.

A more serious and lifestyle tone was what we founded the site upon, so our readers came to us because they like that. But, it was tough at times; we were essentially scraping together a bunch of people we knew were out there, but weren't used to having a home. So, in that sense we had resistance, in that we were a new type of site, but that's to be expected.

On games as art:

Works of art have been and will continue to be held in question, and banned. I think of art as something that evokes a response; sometimes that response is "hey this is fun"; sometimes its "that's pretty"; sometimes it's upsetting. People don't like to be upset, so that's when things get banned. But upsetting art with a purpose is also sometimes the best.