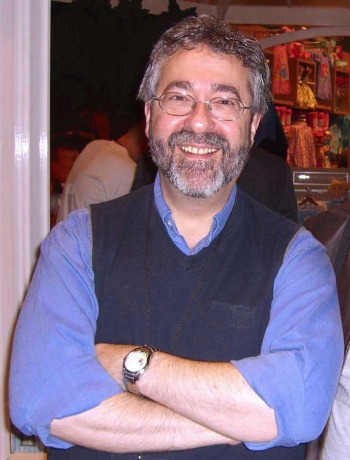 From the Ultima series to Epic Mickey, Warren Spector has had a long, impressive career, but let's be honest: this award is all about Deus Ex.

Come March 7, Warren Spector (or a viable surrogate) will take the stage at the annual Game Developer's Choice Awards) to accept a lifetime achievement award from whoever it is that gives those things out on behalf of the Game Developer's Conference. This shouldn't come as a surprise to anyone who was playing PC games in the early years of the new century, but for those of you who only know the man as the chief figurehead behind Epic Mickey, here's an official rundown of his achievements in the world of gaming:

With a career in games spanning nearly 30 years, Warren Spector has earned a reputation in the industry as a seminal designer and a champion for the proper execution of ideas in video games. His work on the career-defining Deus Ex took place while he was serving as a partner at development company Ion Storm and running their Austin-based office. Upon its release in 2000, Deus Ex received wide critical and industry acclaim and in 2009 was named "Best PC Game of All Time" among a list of 100 other titles in PC Gamer magazine.

In 2004 Spector left Ion Storm and the following year established Austin-based video game development firm Junction Point. Junction Point was acquired by Disney Interactive Studios in 2007. Immediately following, Spector began leading the design of Disney Epic Mickey, which released in 2010 and marked his first title as part of Disney Interactive Studios. The game featured Spector's hallmark style of choice and consequence gaming, which he refers to as "Playstyle Matters," and was praised for its unique storyline, charming art design and tribute it paid to 80 years of rich Disney history.

Since beginning his gaming career at Steve Jackson Games in 1983, Spector has played a key role when it comes to redefining genres. As a producer and designer on titles like TSR, Inc.'s Top Secret/S.I. and Marvel Super Heroes, ORIGIN's award-winning Ultima game series, including Ultima Worlds of Adventure: Martian Dreams, Ultima VII: Serpent Isle and Ultima Underworld, as well as Looking Glass Technologies' critically-acclaimed System Shock, Spector demonstrated his ability to open up new avenues in the role-playing arena and provide players with a fresh gameplay experience.

Also, in completely unrelated, weird, yet pretty cool news, apparently Mr. Spector wrote a wrote a six-issue series for BOOM! Studios' Ducktales comic in 2011, the finale of which was a crossover with the company's Darkwing Duck book.

But, getting back on track, the key point you should take from all of this is that Warren Spector was one of the driving forces behind the brilliant, groundbreaking Deus Ex. In an era dominated by Unreal Tournament, Deus Ex proved that gamers craved a more intelligent, story-driven shooter, and it subsequently paved the way for titles like BioShock and, of course, the recent Deus Ex: Human Revolution.

If it wasn't for Spector's work gamers might still be mindlessly taking potshots at enemies with rocket launchers, instead of assessing their surroundings and opting for a more restrained, cerebral option (read: using bionic super-strength to crush guards to death with a refrigerator).

Thanks for that Mr. Spector.

Spector has definitely earned it, he had his fingerprints on a good half dozen of the best games ever made. People sometimes forget that he had ties with Origin AND Looking Glass before ION Storm even existed.

honestly I think that he's more deserving of it for Martian Dreams and Ultima Underworld rather than Deus Ex, as I didn't really find that one to be as great as everyone says
then again, I didn't get really far into it before having to uninstall it due to file corruption

but yes, the dude deserves it

Deus Ex is one of a few games that changed my mind on what games could be, and Spector was very involved in its creation.

It's a shame that after he set the bar so damn high for a time, very very few games have actually approached the level of integration between gameplay mechanics and story that his did, and have become highly formulaic since then.