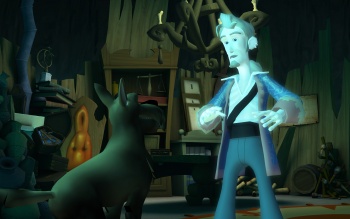 Guybrush Threepwood, mighty pirate, is dead. The star of LucasArts and Telltale Games' Monkey Island franchise met his maker at the end of the last entry in Telltale's Tales of Monkey Island episodic series, and he's still dead at the beginning of the newest (and final) chapter: The Rise of the Pirate God. See, Modern Warfare doesn't have a monopoly on the art of killing central protagonists in games.

Since the cat's out of the bag you might as well just get the whole story. It's something of a convoluted tale, but the four Tales of Monkey Island games thus far have found Guybrush attempting to stave off a deadly pox from infecting all of the caribbean. After saving the world, Guybrush was rewarded with a fatal stab in the back courtesy of his arch nemesis LeChuck, who had been playing good guy this entire time. So yeah: dude is a goner.

Well, not really. The Rise of the Pirate God opens with a panoramic view of a quaint little hill situated in the underworld. There's a grave at the top of the hill, with a gravestone clearly marking that there lies Guybrush Threepwood. Highlight the grave with the cursor and click on it, though, and there's a little bit of movement. Do it again and a hand pops out, and then Mr. Threepwood himself rises from the grave. There's a little shred of life in him, it would seem. Really, there is: if you look into the inventory you'll see an item called the "Shred of Life" in there.

Once he rescues himself from the grave, Guybrush finds himself on a dock (with a soda machine, go figure) where a black-robed and skeletal ferryman awaits. Here you can enter into one of what I'm sure is one of the more light-hearted interpretations of the "conversation with Death" dialogue.

"Am I dead?" Guybrush asks.

"Am I really, REALLY dead?"

Yeah, Dante's Inferno this ain't. The ferryman relents after much pestering, and Guybrush is off to another part of the underworld and eventually the land of the living. I got a brief glimpse of that section of the game, which Telltale estimates is an even split with the underworld parts. Back in the realm of living, breathing humans, Guybrush is still mostly dead. He can talk to people but not touch anything, which will force him into creative solutions for whatever puzzles await in the game. I wonder how much space a ghost has in its item inventory. Probably not much, right?

The Rise of the Pirate God is the final episode in the Tales series, and Telltale says it'll wrap up the story in a conclusive way. I'm going to assume that this is all going to end with Guybrush defeating LeChuck, saving his wife and saving everyone, but from what I've seen it seems like it'll do it with a clever concept and the same level of comedic panache that the developer has shown in the previous episodes. As for where Guybrush is off to next now that he's been to hell and back, well Tellale says there's "still more story to tell," so I don't know, maybe he'll be in heaven next time. Really, what did he do to deserve going to hell in the first place? Yeesh.

I haven't played the previous games, and I realise that I've been missing out a lot. This sounds pretty awesome, which means that the next thing I'm going to do (as soon as I can get the funds together) is go and buy or download all the Tales of Monkey Island games, Grim Fandango, and Psychonauts, and complete them all in one massive sitting. How I've lived without them for so long I'll never know...

PUT SPOILERS ON THE BLOODY TITLE!

I are angry now.

I'm a bit sad at the spoilers, and am still a little surprised that yall didn't make a news post for Fatale...
Perhaps I can hijack someone else's computer, since I can't get these guys games to work well on my own...

Anybody watch after the credits?