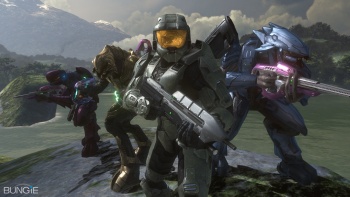 Over the weekend, a three-minute-nineteen-second match on Halo 3 was something more than a simple round of Infection on Foundry - it was the game's one billionth multiplayer match played since launch.

Yes, that's "billion," with a B. It's one hell of a milestone - but there are a few ways to look at it that make it alternately less and more impressive, depending on how you slice it.

On the one hand, Halo 3 is one of the best-selling games of all time: As of last January (that's 2008, not 2009) it had moved over 8 million copies. If every one of those 8 million gamers played just 125 rounds online, Presto! We'd have our one billion matches - and it should be easy to rack up 125 games in a year and a half, right?

On the other hand, expecting every single person who bought the game to play it online - let alone for that long - is a bit of a tall order. Furthermore, some of the other stats that Bungie has released to accompany this milestone are staggering: If every match lasted only 3 minutes, gamers have sunk a combined 2,300,000 days into Halo 3 online, or 6,301 years.

But really, 3-minute matches are on the short end of things, aren't they? In order to be more accurate, Bungie got their database guru, RocketMoose, to crunch some numbers to find out total playtime: If ten players played in a ten-minute match, their database would record that as 100 gamer-minutes spent online. The numbers were crunched, and the data spit out - the sum total of how long people have played Halo 3 online.

Are you ready for the numbers?

2,023,153,340,764 seconds. Two trillion seconds. 64,109 years. This doesn't count Custom matches - or frat kids playing splitscreen offline, either. That is an absolutely mind-blowing number. I suppose it's a good thing Neanderthal Man didn't have Halo 3 64,000 years ago - who needs to invent fire when you have deathmatches to play?

Interesting timing on the milestone, too - kind of feels like Bungie's own "Ha, take that, Killzone [http://www.escapistmagazine.com/articles/view/editorials/reviews/5812-Review-Killzone-2]!" But seriously, one billion - even Halo 2 hasn't gone that far yet. According to Bungie, it's still "sitting pretty" at a mere 798 million matches played.

If you were to stack all of those matches up, it would go all the way to the sun and back around to the Earth! That's enough social slayer matches to convince 82 congressmen at once that they can suck up another family values vote with a game censorship bill.

Wow.
Like it or not, I suppose you can't deny the popularity of the game...and this only solidifies that fact. Makes me want to pick it up again for the multiplayer, since when I had the game I didn't have high-speed and never played it online...but I have no money. Oh well!
Good show, Bungie!

Some of that is me! I've contributed my share of hours/matches to the tally.

If you've been reading some of my posts, you'll know I'm not a Halo fan. But I can't say I'm at all surprised. Mind you, I don't dislike Halo, I just don't think it's the greatest game ever like some people do.

The Fanboy Strikes Back!

Man the ion cannon! We must abandon Hoth!

Concerning the topic, is the Escapist totally incapable of using any other Halo 3 picture?
E

Wow. If only all that time had been spent doing something useful.

oliveira8 said:
I bet Counter Strike has much much much more.
Click to expand...

I was about to say that

Only their quintillionth? Man that falls short of expectations.

It is amazing how much time was spent playing these matches since last January.
T

Wow, that is a pretty impressive amount of games played.
H

Which game has the most online matches played? CSS?

I think that number might be a little conservative there Indigo.

Apparently I need to look at these announcements sooner and more closely; fan site Halo.Bungie.Org says that the "billionth game" announcement piece had two Live code keys for free copies of the upcoming Mythic map pack hidden in it. I don't know where, and they're used now, but that sort of stuff is why I like Bungie as a studio.