A new teaser for Star Wars: <a href=http://www.escapistmagazine.com/tag/view/the%20force%20awakens?os=the+force+awakens>The Force Awakens has been released, complete with Han, Chewie and the reveal of the film's villain.

The opening panel of 2015's Star Wars Celebraton just came to a close and it ended with a bang. More specifically, Lucasfilm president Kathleen Kennedy and J.J. Abrams unveiled the film's second teaser.

About two minutes in length, the new <a href=http://www.escapistmagazine.com/news/view/138813-Star-Wars-Episode-VII-The-Force-Awakens-Official-Trailer>trailer opens with a shot of a desert world that pans right to reveal a crashed and ruined Star Destroyer. This is followed by a shot of an off-screen figure holding the skull/helmet of Darth Vader, another brief scene of a cloaked figure with a robotic hand patting R2-D2 and a woman grabbing hold of what appears to be Vader's lightsaber. This opening sequence is accompanied by an off-screen voice saying "The Force is strong in my family. My father has it. I have it. My sister has it. You have that power too."

As this line ends, the trailer shifts to a brief snippet of Oscar Isaac's <a href=http://www.escapistmagazine.com/news/view/139036-J-J-Abrams-Reveals-Character-Names-From-Star-Wars-Teaser>Poe Dameron flying in a formation of X-Wings. We then get a rapid sequence of cuts showing off the film's villain Kylo Ran, the characters Finn (John Boyega) and Rey (Daisy Ridley) running from explosions and then a whole bunch of the movie's new Stormtroopers and Tie Fighters looking imposing and blowing stuff up. We also catch glimpses of a new Star Destroyer, a nifty-looking silver Stormtrooper and the droid BB-8. The trailer closes off with the Millennium Falcon outrunning a Tie Fighter and then, finally, our first glimpses of Harrison Ford and Peter Mayhew as the older versions of Han Solo and Chewbacca.

Now obviously there are some things of note. Going by the context of the line, the accompanying imagery and the Mark Hammil-ness of the voice, it's fairly likely that it's Luke Skywalker speaking at the teaser's beginning, which would make the woman Leia. Granted, there hasn't been any direct confirmation but, really, who else could it be? The big mystery, of course, is who he's speaking to. Beyond that, I'd say the most interesting aspect of the trailer (outside of the obvious awesome factor), is Harrison Ford's dialogue at the end. "Chewie, we're home," he says. Based on their surroundings, it looks like they're standing in the Millennium Falcon. If that's the case, it suggests that, at some point, they lost track of the ship.

But that's enough speculation from us! We want to know what you thought? What were your favorite moments from the new teaser and what questions did it raise for you?

Damn, I can feel my resistances fading. That trailer actually looked pretty cool. Of course, when you hear that orchstral music welling up, it can be hard not to get at least a little bit excited. I'm not even the biggest Star Wars nerd, and I think this could turn out pretty good.

I was at the local Star Wars Celebration here in Oslo, and just before they were going to present the new trailer, the live connection from Anaheim froze mid-picture. Luckily, the local representative from Disney said that they had a local copy of the trailer just in case. And so we all watched the trailer 3 times

The line is, word for word I think, taken from Return of the Jedi, as Luke tells Leia that she's his sister. It may even be the exact same audio. (Which would presumably make the cloaked figure with the robotic hand Luke, and Leia the one being given a lightsaber.)

Anyway - glad to see Star Wars hasn't given up its habit of flying smaller ships through larger ships.

Definitely 200% more stoked for this now, give the trailer-editor a raise.

Jeez, Paddington, this is how you make a trailer.

I'm actually starting to feel some anticipation, which wasn't something I expected to feel towards a Star Wars movie again any time soon.

God damn it! Every time I convince myself I won't be going to see this movie, they bring out the Falcon or Han.
Damn you Abrams!

Its still bullshit BB-8 is more canon than Dash Rendar.

The_Darkness said:
The line is, word for word I think, taken from Return of the Jedi, as Luke tells Leia that she's his sister. It may even be the exact same audio. (Which would presumably make the cloaked figure with the robotic hand Luke, and Leia the one being given a lightsaber.)

Anyway - glad to see Star Wars hasn't given up its habit of flying smaller ships through larger ships.
Click to expand...

Yeah I think you're right. After hearing Mark Hamill on stage, the voice in the trailer sounds much more like young luke. The only difference in the trailer is that they cut the "You have that power too" and put it after "my father has it, I have it(...)", instead of before, as in the original movie.

I've watched the trailer like five times already. I was on the fence about this movie before but now I am hyped >.>

I demand that all things now be measured in Mark Hamill-ness.

Sadly, however, the trailer does not a single thing for me. I'll still wait for reviews before I go see it.

I am still trying to go into it with an open mind without getting hyped and it is (mostly) working. That bit with someone handing over a lightsaber has me worried tho. Makes me think that the movie starting with a Lightsaber falling from the sky rumor is true. 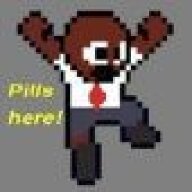 All the CG in the world can't prevent Harrison Ford from looking like a mummy.

I was kinda digging it untill I saw old Ford. I'm sorry, maybe it'll work out, but I'm just getting old Indy flashbacks. And how old is Chewbacca now, because he doesn't seem to age one bit.

And is it me or is that black storm trooper guy gasping and sweating in every scene he's in?

Yeah J.J. Abrams got a bad wrap for what he did with Star Trek, and deservedly so, so people have been skeptical about him doing Star Wars, but really this is the franchise he should have been behind in the first place. The problem with his Star Trek is he was a Star Wars geek, never a Trekie.

Dammit, I can't repel awesomeness of that magnitude!

It actually got me interested now. You better not mess it up Abrams!!

Ok, this trailer is exponentially better the silly mess that was the first one. Despite the loss of the eu still being an open wound, this trailer gave me a thrill.

So the big reveal is that the protagonist is a girl?

I'm kinda tired at them pretending like these things are major. It's like every time I see someone on a show who is on a motorcycle with a helmet. Yeah, I know it's a girl, no need to reveal it like you're being edgy.

I just remember seeing it from a very young age.

No, a good reveal nowadays is it being someone you don't think it would be. A character that's established in the background first and takes over from the person you thought would be the one. Just like it's a good reveal for the villain to be someone you trust but still has clear motivations that were hinted at but you missed (you being most people).

I might have sat clapping and shouting in front of my PC like an idiot. Just a little.

But damn I regret nothing, this looks wickedly awesome. God I love feeling so stocked about it all.


Casual Shinji said:
And how old is Chewbacca now, because he doesn't seem to age one bit.
Click to expand...


Lt. Rocky said:
All the CG in the world can't prevent Harrison Ford from looking like a mummy.
Click to expand...

At least they didn't bother to hide it.
D

Han solo: I'm getting to old for this...

XD "my own version of what should of been said"

Casual Shinji said:
I was kinda digging it untill I saw old Ford. I'm sorry, maybe it'll work out, but I'm just getting old Indy flashbacks. And how old is Chewbacca now, because he doesn't seem to age one bit.

And is it me or is that black storm trooper guy gasping and sweating in every scene he's in?