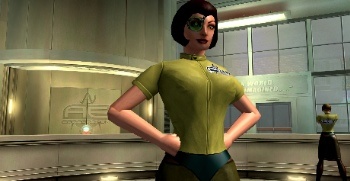 Create your own missions, original enemies and objectives, share them with other players regardless of server and gain rewards. The ultimate MMO sandbox is coming soon to Paragon City.

Anyone who has ever attempted to roleplay with a group of friends in an MMOG has run into this problem. You create your characters, weave together your intricate backstory with friends, plot out story arcs that would make television producers weep and take your work online to involve the larger community. But then once you get together online it hits you: it makes absolutely no sense for your group to join forces to defeat 10 evil bunnies or collect 3 eggs for some local farmer. Coming this March, City of Heroes [http://cityofheroes.com] will allow players to create their own missions that practically equal to NC Soft's content and share them with the entire community. It's as though, all of the sudden, thousands of roleplayers cried out in joy.

NC Soft's creative team, having been inspired by the time they spent fooling around with the level creators found in games like Mission Architect [http://en.wikipedia.org/wiki/Lode_Runner], the creation tool for City of Heroes isn't a separate program, but located within the game just like its famed costume creation tool. By visiting the in-game Architect Entertainment buildings, any player can create or play user-generated content within minutes.

The missions created using the Mission Architect largely seem no different than the ones created by NC Soft themselves, minus any cinematics you may have witnessed. All of the text from the intro, enemy quips, to even what's displayed on the map is fully customizable via a few simple text fields. All of the characters you wish to include from enemy types, friendly contacts and more are fully customizable as well (though dozens upon dozens of defaults are readily available), thanks to the Mission Architects usage of the existing City of Heroes character creator. The amount of options at ones disposal, while absolutely staggering on paper, is extremely easy to navigate and should you have any questions, helpful tutorial boxes are readily available at all times.

The missions created within the Architect can contain a variety of objectives and aren't just limited to simple dungeons with bosses at the end, as you can also create item hunts, along with escort and rescue missions, just as you'd see were you playing through the original City of Heroes content. Mission souvenirs can also be created for those who play through your levels and tickets are handed out for both playing and creating content, which can then be turned in for loot at the appropriate vendors. While playing user-created content, the amount of experienced earned is the same as regular play, to which NC Soft claims that one could go from level one to fifty playing solely user-created content. It may not be practical, but you could do it!

Of course, these tools wouldn't be worth while if they couldn't be shared with others, and the missions created using the Architect can be downloaded by any one regardless of server. There's also a YouTube element involved as missions can be rated out of five stars and feedback sent to the original creator. A Hall of Fame section will be reserved for the highest rated content, with Developers Choice awards being bestowed upon the best of the best. While players can save as many missions as their hard drive will allow, everyone can only have up to five uploaded at any given time.

Overall the Mission Architect is hugely impressive, even in its current beta state. I managed to slap together a fun mission about the fabled Sony Defense Force raiding the NPD facility in order to sabotage next months sales results. Within about 15 minutes I had a fully functioning mission, complete with a boss that cried out "Wait for Uncharted 2!" upon being defeated. You just can't buy that entertainment, which makes this free update coming in March all the sweeter.

Wow...City of Heroes was my faviourite MMO back in the day. Maybe this is a sign I should return...

Hmm...I'm not sure my social life would survive it. Its unsteady as it is.

That was my main complaint with CoH is that it didn't have enough mission variety. It was always "Go into this warehouse. Kill everything. Leave. DO IT AGAIN." Where were the high-speed car chases, mind-controlling parasites, and ticking time bombs set to level the city?
Although it figures they do this just before releasing Champions Online -__-

Jared Rea said:
I managed to slap together a fun mission about the fabled Sony Defense Force raiding the NPD facility in order to sabotage next months sales results. Within about 15 minutes I had a fully functioning mission, complete with a boss that cried out "Wait for Uncharted 2!" upon being defeated.
Click to expand...

It may be time to re-subscribe!

Much as I think this idea is a nice one...User created missions? Can you see what sort of horrors people will unleash? Especially with Ghost Widow et. al.

You are now entering Ghost Widow's Gothic Health Spa...
"Ooh, those arms are usable for something else, Lord Arachnos..."