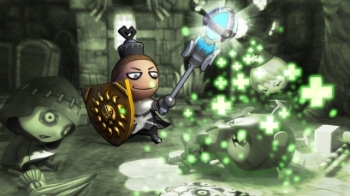 Stop me if you've heard this one: A free-to-play developer believes that the free-to-play model will grow ever more popular to the point that even traditionally full-priced titles end up caught in its perverse, money-free gravitational pull. This time the comments come courtesy of Toylogic president, Yoichi Take.

"I believe it is quite natural that people will gather to play games for free," Take told GamesIndustry International. "I predict that, moving forward, even triple-A titles will be shifting toward Play-for-Free."

Take might just be right. Toylogic's Happy Wars [http://www.escapistmagazine.com/news/view/119268-Happy-Wars-Happy-to-Entertain-the-Poor] will be the Xbox 360's first (technically) free-to-play game, and it certainly won't be the last. Whether the game's microtransaction model will work remains to be seen, and Take notes that Microsoft's purchasing policies make spending money on Happy Wars more complex than it needs to be. Currently, players have to purchase Microsoft points, then use those points to purchase Happy Wars's in-game currency which is used to buy items. And that's assuming players have access to the XBL Gold account required to play the game in the first place. Take declined to answer when asked if that extra cost would impact the game's F2P model.

While Happy Wars launches this week (12th of October), Sony may have already stolen all the best seats on the F2P bandwagon. DC Universe Online and Free Realms are both F2P on the PS3, and Phantasy Star Online 2 will be free on the Vita when it launches in Japan in early 2013. Eve Online spin-off, Dust 514 is another free-to-play title set for release on the Ps3 and Vita sometime this year. Sony Online Entertainment boss, John Smedley, has claimed that making in game purchases "frictionless" is a major concern for the company.

Well now that Yoichi Take said it, I guess it has to be true.

Who the hell is Yoichi Take?

Yes, F2P may do well for a bit, it may even prove a lasting part of the industry, but, it won't be long before people get tired of bullshit nickel and diming adding up to a game which is far more expensive than a single purchase game.

And then they'll just stop paying all together.

Yes because the F2P model will be extremely successfully if everyone is doing it for every game. /sarcasm

His predicition is just as bad as the guy who said mobile gaming will dominate the market and become the sole medium through which everyone plays games.

And even if all game developers used the F2P model then what would probably end up happening would be "Enter Credit Card details here!" to activate and start using the game that is supposedly free. Then you'd discover all these tiny 'Micro-transactions' that have been made every day since you activated the game, even when you've not visited the ingame store for a while, in order for the companies to be making a profit or even staying afloat. In others, no Mr. unknown developer just no.

Captcha: come back No... no Captcha, I'm not letting you taking me back to the bad place! NO! NO! NNNNNNOOOOOOOO!

The reason why F2p is so 'taboo' (or was) in the first place was because they had a reputation of massive-suck.

But things have changed a little bit since then. It really depends on the quality of said games

This statement of his... it's really short sighted... it won't work when everyone is doing it. It works now because it is an alternative to the too expensive way of gaming (ie. $60 per game). But one of the elements of F2P is having a system that keeps bringing the people back and giving them reason to come back and spend money... but since the systems are made so that it requires you to keep coming back, that means games that are not good as good will fail horribly. And, it is only a model that can exist with a publisher or some sort of monetary backing as there tends to be a large financial burden to bear until release and until the game start making money.
Show hidden low quality content
You must log in or register to reply here.
Share:
Facebook Twitter Reddit Pinterest Tumblr WhatsApp Email Link
Top Bottom