HBO's New Game of Thrones Figurines Are Adorable And Mysterious

HBO's New Game of Thrones Figurines Are Adorable And Mysterious 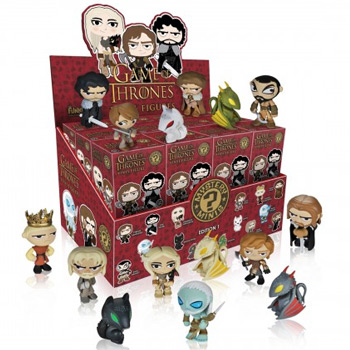 HBO and Funko have unveiled a brand new collection of Game of Thrones figurines.

Game of Thrones is anything but adorable, unless you think that incest and decapitation are cute. But HBO and Funko have managed to form an unholy alliance between adorableness and barbarism. This week, the companies unveiled a new line of mysterious Game of Thrones figurines.

I use the word mysterious, because each of these figures comes in a blind box, which means that you won't actually know if you're receiving Robb Stark or a white walker until the character is in your hand. The collection also includes Jon Snow, Arya Stark, King Joffrey, Daenerys Targaryen, Khal Drogo, Jaime Lannister, Tyrion Lannister, Ned Stark, Viserion, Ghost, Shaggy Dog, Drogon, and Rhaegal.

The figurines are currently available for pre-order on HBO's website, and orders will begin shipping on March 6th. Part of me wants a King Joffrey just so I have something to strangle while I'm watching the show.

Game of Thrones' fourth season will hit airwaves this year. HBO hasn't given an exact date yet, but the previous seasons all premiered in March or April, so that's probably a safe bet.

I wonder if I can convince my local game store to stock these. I would gladly dish out money until I got them all. I could ebay it but there is something oddly fun about collecting them and trading them with actual people. you know, not be a complete shut in on the internet.

Love them, but am not a fan of the blind box. Hopefully my local comics/collectables shop sells opened ones so that I can actually just buy the one I want (Arya) straight away. Otherwise, I can't see myself buying any of them at all.