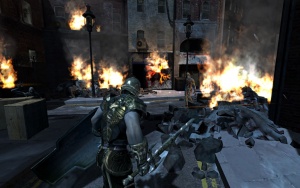 Flagship Studios CVO has responded to concerns about employee turnover.

Brevik began by addressing Hellgate's launch problems:
[blockquote]
We will be the first to admit that Hellgate: London did launch with some problems. The game would certainly have benefited from a couple more months in the oven, but as an independent developer we didn't have the ability to delay our ship date. It can be difficult to stand by and see something that you put your heart and soul into, week in and week out, get the initial reception Hellgate got. It can put a strain on any developer and some days it can get to you. Thankfully, after some very hard work by all the people here... the game is much better now and we believe in the future of Hellgate.
[/blockquote]

He proceeded to defend the studio's employee retention by explaining that more than 100 employees are working on Hellgate expansions or the company's next title, Mythos, including all the directors and founders. The employee turnover rate is less than 10 percent, and all empty positions are quickly filled.

Employee Guy Somberg, whose blog entry ignited the rumors, vouched for this, explaining to 1Up [http://www.1up.com/do/newsStory?cId=3168193] that his post was personal venting, not a corporate expose.

"When I wrote that blog post I was frustrated and just a little bit overwhelmed, but it was nothing that a mug of hot chocolate, a few hours of gaming, and a good night's sleep didn't cure," he affirmed. "I was surprised and disappointed at the community's response to my words, which were more directed at my family and friends to describe my state of mind at the time, than to give any sort of insight into the company."