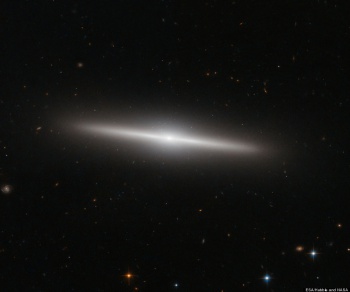 NASA's Christmas present to the world was a photo of a galaxy 60 million light years away.

The galaxy, IC 335, is in a galaxy group that contains three other galaxies. Astronomers classify galaxies as elliptical, spiral, or irregular. However, IC 335 appears to fall in more than one category, but this may be due to the vantage point from Earth, which causes us to see only IC 335's edge. Dr. Jay M. Pasachoff, astronomy professor at Williams College and co-author of The Cosmos: Astronomy in the New Millennium, explained IC 335 belongs to two categories.

"It clearly isn't an elliptical galaxy since it looks flat, but it doesn't seem to have matter between the stars," Pasachoff told The Huffington Post, "so the scientists involved classify it as an intermediate type between spirals and ellipticals."

NASA stated the arms of a spiral or the bar across the center, common characteristics of a galaxy's morphology, are only visible in the face of IC 335. The lenticular galaxy is somewhere between a true spiral and a true elliptical galaxy.

"They have a thin stellar disk and a bulge, like spiral galaxies, but in contrast to typical spiral galaxies they have used up most of the interstellar medium," NASA stated.

IC 335 is made up of mostly aging stars, and its star formation rate is low. This is often the case for elliptical galaxies. These galaxies passively evolve, but they have usually had violent interactions with other galaxies before. Fading spiral galaxies usually do not interact with other galaxies, and sometimes two spiral galaxies as they age will merge into one. Both are "early" galaxy types as they continue to evolve passively while we observe.

NASA noted there is still much we do not understand about galaxies, but we can expect to see many more wonders from the Hubble Space Telescope.

Yeesh, some people are never satisfied... Tuk, it's fine if you don't like astronomy, but they can't hear you over here. Even still, you're making cracks because the Hubble is doing what it was built for? Seriously, it was made to be a big eyeball looking at the universe. What else would you expect from it than pictures, realistically?

BigTuk said:
Seriously NASA... why are we funding you again? Is the reason you keep outputting pretty pictures have anything to do with the fact that the more you learn about space the more it looks like we aren't getting off this planet?
Click to expand...

Oh, yeah. I mean, it's not like they're designing and testing a brand new crew pod for interplanetary travel [http://www.escapistmagazine.com/news/view/138859-NASA-Orion-Spacecraft-Test-Flight] and rockets that can send said pods to Mars [http://www.escapistmagazine.com/news/view/137114-NASA-Approves-SLS-Space-Launch-System-Construction-Worlds-Most-Powerful-Rocket-Boeing].

Oh dear. So they used the Hubble telescope to take a pretty picture? Cut their funding! After all, they're wasting money, using a telescope that has been in orbit, since the 90's!

What exactly is your problem?

BigTuk said:
Uh Yeah NAsa.. you got anything that doesn't look like someones first Photoshop project... No seriously. Why do you waste our time with things like this. 60 Million light years away... for bloody sakes... that's basically saying this is what this galaxy looked like when the dinosaurs were still around.

Seriously NASA... why are we funding you again? Is the reason you keep outputting pretty pictures have anything to do with the fact that the more you learn about space the more it looks like we aren't getting off this planet?
Click to expand...

I find it sad how the people least informed and knowledgeable about NASA, science, and how discovery and invention really works are always the first people to cry and moan about funding and and dismiss any discovery that isn't earth shattering. The Hubble telescope costs less than a dollar per person per year to maintain and operate. Go eat at McDonald's ONE time. Congrats you just chipped in more than enough to pay a share for the Hubble.


Go educate yourself, you sorely need it.

So you're saying these are pictures from a long time ago of a galaxy far, far away?

All I'm saying is. Shut down Nasa for a decade or two and shunt all the money that would have gon to it towards stem cell research Bioengineering and transhuman cybernetics. Then we can start up the whole space thing again.
Click to expand...

It's nice to see your reaction is at least based in something vaguely practical, rather than a mere disinterest in astronomy. However, I have to question what this article has to do with interplanetary travel? We're talking about the Hubble telescope here. It's definitely a sunk cost, there will never be another service mission for it. It's pretty much just a free tool to us until it breaks down.

And for what it's worth, the Hubble Telescope has been one of the greatest investments the scientific community could have ever hoped for.

As for the in-hospitality of other worlds? I'd say you've shortchanged the moons of Jupiter and Saturn, which have promise not only for being eventually habitable, but even for extra-terrestrial life. Of course I would say the least habitable place is space itself, with it's complete lack of anything to support life at all, including gravity, and people have survived there for months at at time.

There are many other places where extra budget could be pulled from that would better, why must it be NASA that people like to use as their scape goat? Because they don't know any better, that's why.

Your point/meaning is irrelevant because the way you propose to "get it" is flawed. I didn't miss anything, but why waste time discussing a flawed opinion born of ignorance.

You talk as if NASA itself is the barrier that is preventing such amazing advances from occurring, and it's simply not.


So many advancements to our lives and our future has been a result of NASA and it's funding.

EDIT: Tool. Tool is worth a report.. okay then.

I'm curios so I'm just asking this for clarification you understand?

There are a lot of people and a lots of countries on Earth, why wouldn't, couldn't or shouldn't we multitask?
It seems to me that if everyone pursues their interest we would gain more overall from the potential fallout than if we restricted our field of view.

Secondly, what would force the government to allocate that money to what you want, instead of just sinking it into more military spending or something else completely unrelated to advancing humanity?

I'm speaking as a fan of Transhumanism myself.
D

BigTuk said:
Seriously NASA... why are we funding you again? Is the reason you keep outputting pretty pictures have anything to do with the fact that the more you learn about space the more it looks like we aren't getting off this planet?
Click to expand...

If you told someone a hundred years ago that man could make a device to travel faster than the speed of sound, pretty much everyone would have called you crazy. Yet within their own lifetimes they could have witnessed us doing just that. It's virtually impossible to predict where technology is going to take us, especially when we're increasing at the exponential rate that we are.

In the mean time, space is the rest of the universe that we reside in. Studying it seems rather important to me.
D

You take my comment about the constant increasing levels of human technology and twist it into a rant on pacifism that doesn't address my original point at all. Bravo. I've not seen these kinds of mental gymnastics in response to me in some time.

I don't give a flying fuck about trying to stop humanity from killing itself. It isn't going to happen this side of post-scarcity, and I kinda doubt on the other side too. Now address my original point.

BigTuk said:
Hence why I say, shelve space for a while.. it's not going anywhere but if we don't fix our mentality Well suffice it to say if history is any indication.. the first use of luminal acceleration device will be to level a continent.
Click to expand...

Space may not be going anywhere for a while, but there's plenty of stuff in it coming our way. "Shelving space" may just leave us ignorant to some coming threat that could obliterate this tiny blue marble (or at the very least everything on it). The rants of misanthropes aside, humanity is not its own biggest threat- some random rock plowing into the planet is.

First we need to fix the energy problem. Then we need to start making FTL drives.

Tuk, if the central theme to your pessemism here is the hostile nature of human beings, how about leading by example? Because you're basically discontent at scientists who know their jobs and picking fights because people don't buy into the comments.

Oh shit....
That looks like when the DeathStar destroyed Alderaan [sub][sub]no it doesn't, but it could![/sub][/sub]
Quick! Get to the CHOPPAAAA!!!!

Why am i not even surprised any more when something as simple as an image of a distant galaxy can turn into a full on shit flinging contest.

Very well, if this must be a flame war, lets up the heat a bit.

I for one think this sort of wonder is worth - what does it cost now, a fraction of a penny? - of anybody's money.

DeviantArt doesn't have that. It can't do that!

It probably has a lot to do with the fact that I imagined those words being chanted by Daffy Duck, but I may have laughed at this a lot more than I should have.

OT: I know it's rather cliche to say this, but looking at pictures like this always makes me feel incredibly insignificant. It's in a comforting way though. Makes me think that no matter how badly we might ruin everything here (not that I'm one of those people shouting about doom and gloom all the time), our effect on the vastness of everything else will be essentially meaningless.
Show hidden low quality content
You must log in or register to reply here.
Share:
Facebook Twitter Reddit Pinterest Tumblr WhatsApp Email Link
Top Bottom