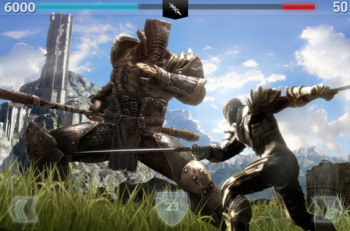 During a keynote speech at GDC Taipei, Epic Games CEO Tim Sweeney had a lot to say about gaming, technology, and what we might expect to see in the future. During the conversation, an interesting detail emerged that was later confirmed by Epic executive Mark Rein <a href=https://twitter.com/MarkRein/status/217945504112320513>via Twitter: of all of the games Epic developed over the past two decades, Infinity Blade stands out as the most profitable in terms of man years invested versus revenue.

"It's more profitable than Gears of War," Sweeney explained to the audience, emphasizing the implications for console developers. "Nowadays the high end of the game business is in these console games ... Activision invests almost $100 million per year in Call of Duty."

Rein is quick to point out that Infinity Blade has not brought Epic the highest overall revenues, just the highest profits for the amount of time Epic spent making it. Regardless, Sweeney sees this as evidence that developers need to change with the times. If the common smartphone can catch up visually to the Xbox 360, which Moore's Law states that it will, games must naturally adapt themselves to be cross-platform experiences.

It is for this reason that Epic's new engine strategy is called "Unreal Everywhere". Sweeney wants to see the new Unreal Engine not just on PCs and consoles, but also on smartphones, web browsers, and even Adobe Flash. "We expect to be able to build games that can scale from a smartphone to a high end PC," Sweeney said. "We expect an unprecedented amount of content portability for the future."

Sweeney predicts that two other big factors driving console development will be digital distribution and free-to-play games. The ability to develop a free game using the Unreal Engine that will launch simultaneously on PCs and consoles is "a very real possibility".

but I have ask: why would I want to witness the splendour of the unreal engine on the tiniest screen on the current market?

Combustion Kevin said:
but I have ask: why would I want to witness the splendour of the unreal engine on the tiniest screen on the current market?
Click to expand...

They have very good high resolution screens, have you seen the iPhone 5?

The Unreal Engine: now coming to everything near you.
G

If the common smartphone can catch up visually to the Xbox 360, which Moore's Law states that it will, games must naturally adapt themselves to be cross-platform experiences.
Click to expand...

Wait, it can't already? The X-Box 360 was dated hardware 5 years ago; I thought that level of power was already achieved.


Combustion Kevin said:
but I have ask: why would I want to witness the splendour of the unreal engine on the tiniest screen on the current market?
Click to expand...

Give your phone an video out port; problem solved!
U

This must mean they're abandoning consoles.
They abandoned the PC when Gears turned into a blockbuster.

Not my kind of game, but I like the general feel of it and some of what it does. Cool that they get to make a product they enjoy and have so many people love it in return. Sales might not be super massive (black hole) but they're making bank. Good stuff ^^
B

I have infinity blade 1 and 2 on my iphone (and still a pc gamer, i like to vary my pleasures though).

It's a pretty cool game, and found out how to use the iphone interface correctly. It's REALLY demanding in ressources though. My iPhone 4 has no problem with IB1, but the second game feels heavier and I can see some slow down. I'd say there still needs to have some better optimisation cuz I don't want to buy a new iphone or iPad everytime they bring out a new one.

Gather said:
Give your phone an video out port; problem solved!
Click to expand...

This! My current phone has a mini HDMI port and it's quite a bit handier than you might expect. Although since the boss man bought my sales/tech team Android tablets a few months back I've been using that for video output a little more than my phone most days.

Yay, in the future every game will have bad graphics, pop-in, and look like they were dunked in dirty dishwasher water. I can't wait for Unreal to be on everything.

What's wrong with portable consoles? You know, those devices which were tailor made for gaming, have a slew of extra features and actually feature buttons which are designed for gaming and don't need to be replaced every six months? I mean, wow, way to shit all over people who bought a Vita or a 3DS (more than the 3DS XL already has that is). If you wanna play engaging content on a phone which has more depth than Angry Birds, buy a portable gaming system, am I the only person who has realised this?