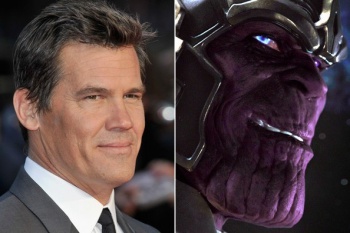 Josh Brolin, who voiced Thanos in Guardians of the Galaxy, mentions he knows of one more appearance for the villian in a Marvel movie, but there's "one or two" that he doesn't know about.

While the rumor that Josh Brolin would voice Thanos in Guardians of the Galaxy (and in future Marvel films) panned out [http://www.escapistmagazine.com/news/view/134924-Josh-Brolin-Rumored-As-Thanos-in-Guardians-of-the-Galaxy], that didn't really satisfy fans who wanted to see The Mad Titan do some evil stuff in his official film debut. By now, it's a given that Thanos will play a major role in Marvel's Cinematic Universe, but we don't know how many times Thanos will appear on the big screen -- until now, that is. Speaking to IGN, Josh Brolin confirms that Thanos will be in at least three Marvel films. While he has "an idea" of where Thanos' arc is going in Marvel's film universe, he doesn't know the entire picture. "I know what one appearance is going to be for sure. There's one or two that I don't know," Brolin mentions.

Elsewhere in the interview, Brolin was asked whether he was told to keep quiet on everything he knows about the upcoming Marvel films [http://www.escapistmagazine.com/tag/view/marvel?from_search=1].

I think they just assume...Because they took so long to confirm that I was doing it, that's just the feeling you get. I heard Kevin [Feige] up on stage at Comic-Con -- because I was backstage listening to him -- and I was like, 'This motherf***er is so smart.' He's so good. He's so smart -- and what a great thing. You want to know what I know. What better than to be reaching out for it, because that makes you want it. We have so little of that left. I was talking to Paul Thomas Anderson about Inherent Vice, and they're saying the studio wants to show the publicists and all that, and he was like, 'No, not yet,' because it's like, 'What is it? I want to know what it is.' You want people reaching out for it... It's fun for me, honestly, to see, because I didn't know the severity of it. It's severe. It's a big deal. I was talking to Robert [Downey Jr.] about it 20 minutes before [the Comic Con panel]. We've known each other for a long time, but it was a different conversation. He was just like, 'This is a whole different universe.

If you have't seen Guardians of the Galaxy yet, you can check out what Guardians of the Galaxy sequel [http://www.escapistmagazine.com/news/view/136582-Marvel-Releases-Thanos-Pic-From-Guardians-of-the-Galaxy], what are the two other films is Brolin referring to? Could one of it be for Avengers 3 where we might see the Infinity Gauntlet story arc take place?

I love Josh Brolin, ever since Goonies I've been a fan. As far as Thanos goes, I squee'd a lot when I heard he was going to be the Mad Titan. Awesome, pure winning awesome. I'm banking on Avengers 3, but one thing that'll suck if they do end up with the Infinity Gauntlet story is that there's no Galactus. Meaning there won't be an iconic moment of Thanos wielding the Gauntlet against the mighty Celestials, Galactus, Eternity and all the other giants of the cosmic Marvel Universe. I mean it may still have the others but without Galactus they all seem so much background noise.

My guess he will appear in GoG2, a cameo in Avengers 2, and finally face the heroes in Avengers 3.

Goodie. I knew he'd appear in at least one more flick, but it's good to know for sure that there'll be at least three more.

They are seriously building Thanos up. A mere appearance in the Avengers credits. A few scenes in Guardians of the Galaxy. I only hope he lives up to the hype. I know a bit about how insanely powerful Thanos is and some details about him and the Infinity Guantlet, but not much else.

Come on, Marvel. Don't stumble at the finish line on this one.

I just saw GotG today. Personally, I think the build-up to Thanos is the thing they are doing the absolute best in the entire continuity so far. This is by far the best use of multiple movies working together to build up a villain. I haven't seen it done this well since Blofeld in the original James Bond series. I can only hope the pay-off is better than Blofeld's was, because I'd hate to see Thanos turn out to be a whiny, petulant little dipshit like he did in You Only Live Twice.
But given how Thanos chides Ronin for being exactly that, I'm pretty sure they won't.

It makes sense if you think about it. There are 3 Infinity Stones (gems) left in play. We suspect that Avengers 2 will revolve around what is possibly one of those that we have seen before. The head of Loki's staff. Which is probably the Mind gem. ( for those not keeping score, the Cube is the Space Gem, The Aether is the Reality Gem, the Orb is the Power Gem). Thanos may or may not show up there.

That leaves us with the other two gems, which will probably be put on the playing field before Avengers 3. The Time Gem and the Soul Gem. One of those will probably be the McGuffin centerpiece for Guardians 2. If I had to speculate I would say the Time Gem as that would let them play a little with the classic 70's Guardians. And let them pull that classic scene from the modern comic of finding the figure frozen in time lost limbo holding Captain America's Shield, which so nicely mirrors the opening to Captain America Winter Soldier.

The other Gem is the Soul Gem. That one can go a few different ways. They are making a Dr. Strange movie. And I can easily see Marvel using Dr. Stranges most powerful artifact, the Eye of Agamotto as the Soul Gem. It would make sense. Alternately it might show up in Guardians 2, as the one real reveal in the Guardians of the Galaxy end credits scene was NOT the duck. It was what was behind the duck. And what was behind the duck was notification that Adam Warlock has entered the Marvel Cinematic Universe. And Warlock is traditionally associated with and more often than not the keeper of the Soul Gem.

There have also been rumors that Marvel is considering doing at least some form of the Planet Hulk storyline in a movie. That would seem a likely place for Thanos to show up. I con't really see him popping in for Dr. Strange, Ant-Man or Cap 3? Seems a little out of place in a techno spy thriller. Maybe Thor 3?

RJ Dalton said:
I just saw GotG today. Personally, I think the build-up to Thanos is the thing they are doing the absolute best in the entire continuity so far. This is by far the best use of multiple movies working together to build up a villain. I haven't seen it done this well since Blofeld in the original James Bond series. I can only hope the pay-off is better than Blofeld's was, because I'd hate to see Thanos turn out to be a whiny, petulant little dipshit like he did in You Only Live Twice.
But given how Thanos chides Ronin for being exactly that, I'm pretty sure they won't.

The biggest fear is if they build it up beyond what they can actually pay off. I like that they have been keeping a mostly light touch. Just a glance here and there with no real obvious overt actions yet. very very comic book in nature. Which is kind of the point.

Am I the only one who considers the CGI job they've done on Thanos to be objectively hideous?

I suspect he will appear in Avengers 2 and 3. Certainly 3, which will culminate in the Infinity Gauntlet arc (if Thanos ever gets around to finding any of the stones ...), but I imagine they will tease his purpose further in no. 2 in a similar way to the first film (so we don't forget that he is the Big Bad).

Predicted this possibility on my blog, but I'll go ahead and say it here too. I DON'T think that the Infinity Gauntlet Story line will be used for Avengers 3.

The only reason I say that is because the Infinity Gauntlet story in the comics required the use of SO MANY characters from the Marvel Universe just to challenge Thanos (and still not fully succeed on their own). As such, we have barely a fraction of those characters in our current Avenger Roster. And even if we add Dr. Strange and Ant-Man, that doesn't add much (and that's including the known supporting characters). My speculation is that Infinity Gauntlet won't happen for a while because we still have plenty of loose ends to tie up and plenty more heroes from near and far to introduce before we can make the showdown with Thanos as big and epic as it was in the comics.

Paradoxrifts said:
Am I the only one who considers the CGI job they've done on Thanos to be objectively hideous?
Click to expand...

I don't think the CGI was that bad (I'm not an art student though, so it's possible it was riddled with mistakes I wouldn't think to look for). I did, however, think that his armor was completely hideous. He just looked like a lump of gold with a purple face. I'm fine with the fact that they wanted to give him a slight redesign from the comics, but he looks like a villain that was created for a straight-to-TV movie with cheesy effects and low-budget costumes.

Paradoxrifts said:
Am I the only one who considers the CGI job they've done on Thanos to be objectively hideous?
Click to expand...

Half the costuming looked pretty average in Guardians, I'm just disappointed they don't use more of his real face at the very least. I heard they used mo-cap but it didn't carry through convincingly for me.
Show hidden low quality content
You must log in or register to reply here.
Share:
Facebook Twitter Reddit Pinterest Tumblr WhatsApp Email Link
Top Bottom