JourneyThroughHell reviews: Heroes Of Might And Magic V (PC)

Huh... This is my review that I submitted for the Review Wars II (7th place, it's alright) and I never quite got around to posting it.
I stumbled upon it just today and decided, why not?
Enjoy, I guess. 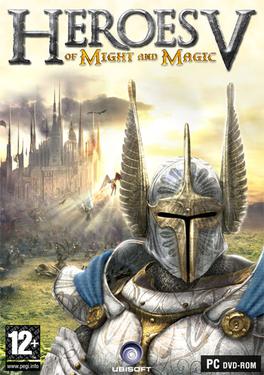 When reviewing a turn-based strategy, it is important to establish the reviewer's attitude towards said genre, whether he is an experienced or an occasional player of such games. Well, in my case it's neither. I've always found TBSs too time-consuming and too "hard to get" for me.

With that said, Heroes of Might and Magic 5 is a game I simply had to play. Not only was it the first game of the series to be developed by a Russian game studios, but several people I know have shown interest in playing HoMM5 online.

Heroes of Might and Magic 5 was released by Nival Interactive in the spring of 2006, four years after the last game in the series.

During those four years, the original developer, Chapter 11, went bankrupt and the series was acquired by Ubisoft who got Nival to make the fifth installment. The developers faced a difficult task of making translating the series in 3D without changing the main features of the series that attracted so many players. Well, did they succeed?

As far as I know, the original gameplay of HoMM has been left unchanged. You control a character of one of six factions on the world map. The game relies heavily on resources which are used to upgrade your castle, which is the source of your army and other characters you can hire. The resources are usually guarded by enemy units. And, of course, there are other A.I. controlled characters who also upgrade their castles and go around the map collecting resources.

The usual TBS formula here is balanced with some RPG elements. You collect experience points and skills for your hero which can largely help you out in battle. There are a lot of skills, more than you'd expect from a strategy game.

The battles themselves are a lot of fun. The A.I. can be a little weird at time but, otherwise, it's a great battle mechanic which makes for a great possibility of tactical decisions and different strategies.

There are several game modes in HoMM5. The main single player mode of the game is campaign, a set of scenarios for every faction strung together by a common line of events. Being inexperienced and all, I found the campaign really difficult, mostly because the A.I. seemed to have been cheating, maybe that's just me.


The main strength of the game is the fact that it is easy to learn for new players yet challenging enough for masters of the genre.

It's not that hard to figure out, a trait incredibly rare among the games of the genre (see Hearts of Iron 2). You will get the many aspects of the game in about an hour, which is a great advantage.

The other strength of the game is its presentation. First of all, the game looks really nice. The maps are well-drawn, the unit models are incredibly detailed and the animations are smooth. It's all very colorful and looks like a fantasy game should.

HoMM5 is a fantasy game to its core. It embraces cliche yet, for some odd reason, doesn't annoy because of it. It is almost too "traditional" and you start wondering if the game is just being sarcastic. That feeling gets stronger when you look at the factions, which are unique in their names but absolutely 100% standard in their line-up: Haven (Humans), Inferno (Demons), Necropolis (Undead), Dungeon (Dark Elves), Sylvan (Woodland Elves), Academy (Wizards). It gets absolutely ridiculous. For example, the Sylvan faction has treants (those giant walking trees from LotR), the Necropolis has zombies and the Haven has griffins.

You might be surprised to learn that the story is absolutely serious and largely unimpressive due to that. It's definitely not bad but it really is nothing special.

Due to the story being rather mediocre, you might think that the main attraction of the game is multiplayer. That might be the case but only with local multiplayer. Online is laggy here and doesn't work nearly as well as local, which is a lot of fun. There aren't nearly enough maps but playing for different factions adds a ton of variety.

There are other major issues with the game. For example, it goes a little overkill with the resources. Apart from the usual gold, iron and wood you get a ton of crystals and metals you absolutely need to get. This turns the game into a resource hunt which it probably is to begin with.

There are also minor thing like the fact that the status bar gives away the result of the attack before the animation, ruining the factor of unpredictability. It's those little issues that make me think the game was a bit rushed or the developers were a bit inexperienced.

The music is good, though, so the presentation of the game is made all the more impressive.

In conclusion, Heroes of Might and Magic 5 is an exceptionally good title. It masterfully pulls off the transition to 3D and keeps the TBS gameplay fresh and interesting. Despite a few issues, it's an enjoyable title especially if you have people to play with. If you are disappointed by the lack of traditional turn-based strategy games in the market, I can't recommend HoMM5 enough.