Looks like a preliminary sketch for a Vallejo painting. 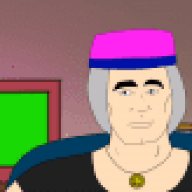 And here I thought 1980s games were primitive when they had to unload all the statistics on cards because it was too hard to code it to present those statistics in games. Apparently Forbidden Quest was a game where graphics itself was considered too advanced, so they gave you five cards with a printed scene on them to use as hints in your text adventure.