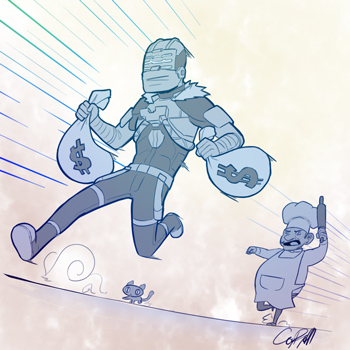 What do bakeries and Dead Space 3 have in common? You're stealing from both of them, you monster.

Dead Space 3's infinite resource "feature" is not a glitch, [http://www.escapistmagazine.com/news/view/122038-Dead-Space-3-Resource-Exploit-Not-a-Glitch-Says-EA] at least, not according to EA. But that didn't stop a British solicitor from suggesting that taking advantage of the "exploit" could be considered stealing, presumably in some bizarre legalese definition of the term.

"If you go into a baker's to buy a bun and they give you the wrong change and you walk away knowing you have been given more change than you handed over in the first place, that's theft," IP expert, Sara Ludlam, told the BBC last week.

"So, arguably if you go into this game knowing you are supposed to be paying for these weapons and you notice a glitch allows you to accumulate them without paying, that's theft as well," she said. "But it is arguable because it's a new area."

Now Ludlam's argument doesn't apply in this case for couple of reasons. One: The fact EA is aware of the exploit but is taking no steps to stop it indicates the company doesn't view it as theft. Two: The resources collected by performing the exploit do not allow players to purchase or craft any items they wouldn't normally have access to during the course of the game.

That being said, the fact we're having this discussion is rather unnerving. Gamers being punished for taking advantage of broken systems is nothing new; the line between an "exploit" and "high-level play" is slim and easily overstepped. MMOs have been banning players for acting against the spirit of the rules rather than the letter for years, but only recently has the idea of cheaters facing actual legal action entered the realm of possibility.

The only upside is that should this horrific future come to pass, you may be able to file charges against those amoral monsters who choose Meta Knight in Smash Bros. Brawl.

Saw this a couple days ago on the Gamespot website. it would be just outright wrong if someone is ever convicted of such a "crime".

Ah! But! What if one of the coins that the bakers gives you just starts mysteriously self-replicating every time you touch it?

Would that be theft too?

That sounded funnier in my head.

Erm... at worst, you are 'cheating'(*) to get some item in a single player game that only affects you. It's not like you are 'stealing change' then going around buying things with it from other vendors. It's just an exploit in game to make your play of it a little easier... (does this hold in the two-player game? even then, if both don't care about doing it...)

I can never take a lawyer seriously when they call something theft considering they make a livelyhood off charging so much to those in need that it practically is theft.

OT: that's just plain stupidity, there are so many thing wrong with that crap it doesn't even need to be pointed out. someone just wants to make more money.

Remember back in the days when EA could release a game without causing lawsuits?

Boosters of achievements, beware, Microsoft will go after you since there is a financial bonus to having at least 25000 gamerscore

Ah yeah, I read about this somewhere. I can actually see game companies taking people to court just like the music industry has done to people that downloaded a song and charging them millions in damages. We're all heading down a very slippery slope at the moment and it's sad to see so many defending the corporations.

It may not be EA or Acti or someone we know today that does it either. Nothing is stopping someone new from coming along and being the big nasty that starts to target the players for their own gain.

On a side note, I love that illustration. 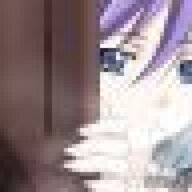 Idiot lawyer who wants headlines should actually know what he is talking about before being wading in. The bakery analogy is atrocious because we aren't "supposed to be paying" for resources.

Resources are already free in the game. You can farm them via other methods beyond just this "exploit". The monetization allows people to circumvent the gathering process, that's it.

A more apt analogy is someone baking bread at home versus buying at said bakery. That isn't stealing and neither is this.
S

Except that his entire point was invalidated the day before this when EA stated it wasn't a glitch.

Whether or not it was a glitch, it was a decent PR move on EA's part to let it slide. It shouldn't be considered a decent PR move, it should just be basic common sense, but it's EA we're talking about here.

What law school did she attend? Taking something for free doesn't automatically make it an unlawfull act. Pretty much any law system knows this fundamental tenet that something needs to be wrong on some level before it becomes a crime.

For one thing it requires intent, or conditional intent at least. Forcing or manipulating someone into giving you too much change would be theft, because that has an intent.

this chick is a fucking idiot if she thinks this is theft.

never mind that EA has already said its not a glitch, never mind EA has said from the beginning that the resource pack are totally optional and at no point needed to get any of the gear, let alone the best gear.

let just go ahead and call it stealing anyway

Wait, I've just been reported to, there's no 'might be' about this.

And this is why I consider legal studies to be a pile of BS.

Trying to apply ownership laws to something as intangible as resources in Dead Space 3 (compared to other more permanent virtual items in MMO's) is stupid.

'lawyer' + 'IP expert' = desperately wants this to be something she can bill time for.
L

It would help if the lawyer understood what she was talking about. You can collect the items in game, or purchase them outside it. There's a certain amount freely available no matter what, so to take those would not be theft, unless you're completely brainless. IP expert my ass.

Added to that, that as many would point out, with a digital copy of something which doesn't exist, you can't take something away, and leave someone else without, so the strict definition of theft fails.

Why is this person a lawyer, and why are their inane musings being reported?

Lawyer that has no actual knowledge of video games and the history of glitches put on the spot by a news organization looking for a story creates a whole bunch of hot air that is popped by EA itself basically saying that it isn't theft.

Personally I'm shocked there hasn't been a youtube video of the news piece. I can't really blame the lawyer because most "experts" that you see on television will make that their career instead of actually being good at you know, their job.

But this just in, using the konami code is committing the act of identity theft.

I think this particular lawyer should go back to chasing ambulances. Seems right up her alley.

The important part isn't the lawyers opinions of or knowledge of games, it's whether her interpretation of the applicable laws are correct.

I can understand the argument too, at least for DLC. Games are software, and since software is licenced rather than sold, if you are using features or content that you aren't granted by that license, your breaching the license, which could be ruled as a form of theft.

I think a discussion to do with valuation of digital assets, and what causes that value could be interesting, especially with the advent of trading systems like steam. At the moment trading is only for assets in multiplayer gamese, where items seem to have a more real value than in single. But what happens if items from a single player game are introduced? I think it'd probably cause massive devaluation of all assets from the given game due to their abundance and ease of aquisition, just like flooding a market with money. I think Yanis Varoufakis and valve would probably do a better job of working out such issues though.

However, if a large company believes that it stands to gain money from something, or need a scapecoat to blame the failings of an outdated business model on, and sees people getting around paying them for it, they will pursue whatever legal avenues they can find. We're better off having someone point this out early on, rather than the first thing we heare being one day getting a letter saying that because their game glitched, they will be sued thousands of dollars.
Show hidden low quality content
You must log in or register to reply here.
Share:
Facebook Twitter Reddit Pinterest Tumblr WhatsApp Email Link
Top Bottom