Lucas Gives In To Dark Side, Crafts Episode 1 Burgers

Lucas Gives In To Dark Side, Crafts Episode 1 Burgers 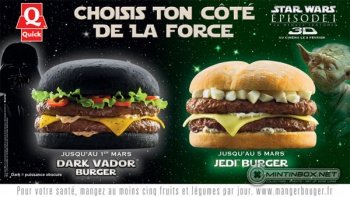 Even if you live in France and are a huge fan of fast food and Star Wars, you'll probably still hate these new burgers.

Even though nobody in their right mind should be even remotely excited about Lucasfilm's upcoming re-release of The Phantom Menace, there's a ton of new merchandise/marketing deals coming out that's tied to the film. However, George Lucas has pretty much admitted that he's willing to slap his brand's name on just about anything, thanks to the Star Wars fast food burgers that have just been revealed in France.

French fast food chain Quick has unveiled its "Jedi," "Dark" and "Dark Vador" burgers. The ad for the Dark Vador and Jedi burgers can be seen here and - let's be honest - they look disgusting. The Dark Vador has a black bun, while the Jedi features ... well, they look like marshmallows, but they're probably just poorly-presented onions. The Dark burger, meanwhile, looks like it might have a reddish bun, but I'm not sure how much of that is the glow-y red Sith effect of the ad.

The Star Wars empire is no stranger to <a href=http://www.oddee.com/item_97612.aspx>crazy merchandising, and the Episode 1 re-release is <a href=http://www.youtube.com/watch?feature=player_embedded&v=LwabxgoSGZY>clearly unafraid to whore itself out, but George Lucas may have just outdone himself with these. I guess we should count ourselves lucky that we didn't get a Gungan burger.

Aren't they the same burgers but just with different minor filling?

What next lucas Lightsaber dildo's
seriously you keep raping the franchise

Christ, that dark side one looks like it's been burnt! 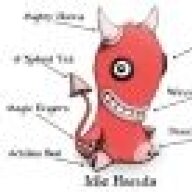 rolfwesselius said:
What next lucas Lightsaber dildo's
seriously you keep raping the franchise
Click to expand...

Well this is pretty close: http://memerial.net/1149_darth_invader

rolfwesselius said:
What next lucas Lightsaber dildo's
seriously you keep raping the franchise
Click to expand...

Well this is pretty close: http://memerial.net/1149_darth_invader

The movies will still make money hand over fist, sadly.

If they were Episode one burgers, there'd be a double meat ended one!

Now George Lucas can simultaneously shit out and shit on the Star Wars franchise.

Multi-tasking at its finest.

And seeing as this is fast food, I really don't want to know how those buns got to be black.

War Penguin said:
Christ, that dark side one looks like it's been burnt!

I'm pretty sure it's the result of a Satanic ritual to give the essence of cancer a physical form.
M

I don't know if I'm more afraid of the black one or the green one. Green is usually associated with sickness but that black burger is so pitch black that it looks like bun-shaped coal. Say what you want about Lucas but even if this wasn't being done for the sake of Star Wars, it's still revolting. It's like when Heinz thought people wanted that nasty looking green or purple ketchup.

... as if a thousand fanboys cried out in shame and were suddenly silenced.

Dark Vador? Isn't it supposed to be Darth Vader...because..well. That is his name!

well, its not like the movies where very good, why should the burgers be any good.

If I lived in France, I'd definitely eat them. Looks like it'd be a fun experience.

WTF LUCAS?
For f'$# sake, someone, freeze that man's assets and take his brain away, he eas ruining star wars, now he has shot
the franchise in the groin with this recent whoring.
When did it all go wrong?
Show hidden low quality content
You must log in or register to reply here.
Share:
Facebook Twitter Reddit Pinterest Tumblr WhatsApp Email Link
Top Bottom