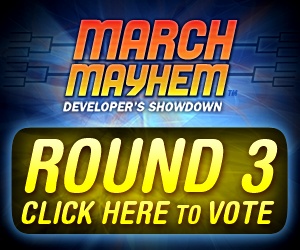 With a few down to the wire match-ups and a couple huge upsets, Round 2 fueled the competitive fire for the Round 3 match-ups.

Round 2 closed Wednesday afternoon and brought with it some upsets, a close point battle and a lot of chatter in the forums. Here is your Round 2 highlight breakdown:


Number 5, 2K Marin, the developers of BioShock 2, upset Number 4 and March Mayhem veteran Harmonix. With the Boston rockers on their way home, 2K Marin will face off against last year's division champion, Nintendo. Chat about it here [http://www.escapistmagazine.com/forums/read/532.183015-Poll-Round-3-West-1-Nintendo-vs-5-2K-Marin].
Number 7 and tournament cinderella, Zynga, brought down Number 2 and tournament favorite, Infinity Ward. With the largest amount of votes in a single match-up yet this year, the real action happened in the forums where fans went back and forth in support of their favorite developer. That doesn't look like it's going to change in Round 3 as Zynga looks forward to locking horns with Grand Theft Auto developer, Rockstar North. Chat about it here [http://www.escapistmagazine.com/forums/read/532.183014-Poll-Round-3-North-3-Rockstar-North-vs-7-Zynga].
Number 3 seeded, Capcom, and Number 11, Obsidian, had fans casting votes up to the very last minute of the 48 hour period, only to have Capcom come away at the end with the win. Did Obsidian's valiant effort in Round 2 take any of the steam out of Capcom's sails as they heard towards Round 3 against Bethesda Softworks? Chat about it here [http://www.escapistmagazine.com/forums/read/532.183022-Poll-Round-3-East-3-Capcom-vs-2-Bethesda-Softworks].
Number 4 seeded, Epic Games, and Number 5 seeded, Naughty Dog, had an amazing match-up, which even took on it's own persona due to Epic's Cliff(y B)leszinski's Twitter post. For the whole story, here [http://www.escapistmagazine.com/forums/read/7.182847-How-Rumors-Get-Blown-Out-of-Proportion-on-the-Internet]


With 16 developers now vying to earn a spot in The Great Eight, Round 3 is going to be a breakout battle for every vote. Head over to the brackets NOW [http://www.escapistmagazine.com/global/tournaments/standings/2-2010-March-Mayhem-Developers-Showdown] and vote for your favorites!

Voting will be open until noon EST on Saturday, March 27th.

Good luck to everyone.

I CANNOT believe that Zynga beat Infinity Ward.
Do people hate MewTwo THAT much?!?

ToonLink said:
I CANNOT believe that Zynga beat Infinity Ward.
Do people hate MewTwo THAT much?!?
Click to expand...

Well they're actually winning against Rockstar right now as well. To be honest (scarily enough) there is a chance they might win the whole thing.

On the other hand this was a pretty interesting round on the whole. Personally my favourite match up was the Naughty Dog vs Epic Games one. I wasn't all that interested in it to begin with but with all what happened around it, it became real interesting. Also as Round 3 seems to be shaping up so far it seems to be quite interesting with the Zynga/Rockstar one getting very heated. Lets hope the entire tournament is just as interesting as the opening rounds have been.