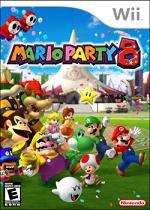 Mario Party 8 [htto://www.nintendo.com] in the U.K. due to the game's use of a potentially offensive word.

A notice [http://www.nintendo-europe.com/NOE/en/GB/news/article.do?elementId=_jR0wKfS2CwpY0y7n8lt4K8-wPFfex7l]posted on the Nintendo U.K. website states that "a small number of games contain the wrong version of the disk due to an assembly error." The company has therefore recalled all copies of the game, with plans to relaunch the title in the U.K. as soon as possible. The game was released on July 13 after a delay of several weeks, and the recall followed almost immediately after.

The offending games use the U.S. translation of the game which contains the word "spastic," [http://en.wikipedia.org/wiki/Spastic] an inoffensive and common bit of slang in North America that in the U.K. is a much more offensive and abusive insult. Originally associated with sufferers of cerebral palsy, the word and its many derivatives, including "spaz," "spag," and "spacko," are now often used to insult anyone who displays physical or mental ineptitude.

The recall follows a similar episode that took place on June 29, when Mind Quiz [http://www.ubi.com]game for the Nintendo DS, over its use of the same word.