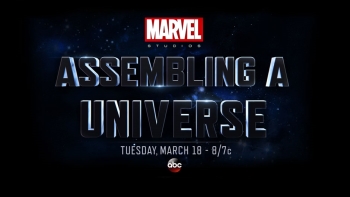 A one-hour television special about the Marvel Cinematic Universe will air March 18 at 8 pm ET on ABC.

In the announcement, Marvel says, "In this exclusive primetime documentary special, audiences will be taken further into the Marvel Cinematic Universe than ever before, offering viewers a front row seat to the inception of Marvel Studios, the record-breaking films, the cultural phenomenon, and further expansion of the universe by Marvel Television." The special promises to walk viewers through the existing Cinematic Universe as well as hinting at its future.

The next entry in the Marvel Cinematic Universe is starring Black Widow [http://www.escapistmagazine.com/news/view/131933-Captain-America-The-Winter-Soldier-Gets-Explosive-New-Trailer] is also in the works.

This looks to be awesome

I can't wait to try to figure out how many future movies they'll hint of in this...
T

I completely missed the James Spader announcement! This is really bad news for the Avengers, because as any Stargate fan knows, Daniel Jackson cannot be killed.

Hopefully DC will be watching...

They got their animated universes down. Let's be humble and let Marvel school them in the cinematic universe.