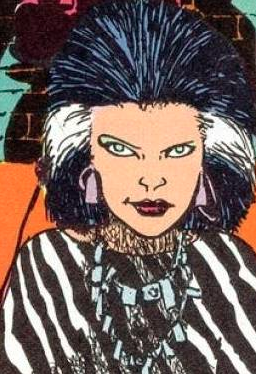 Who can keep track of Constantine's love-life, anyway?

Remember the trailer for NBC's Constantine [http://www.escapistmagazine.com/news/view/134404-NBCs-Constantine-Trailer-Electroshock-Exorcism-Astra-Magic]? Well you can forget it, or at least you can forget any part of it that mentions his female counterpart Liv. Liv - played by True Blood's Lucy Griffiths - was the one with the dead dad who was supposed to be Constantine's best friend, demons, ghosts, yadda yadda, and she was also the one with no apparent link to the original source's continuity. The show's creatives have opted to go a different route, and have cast Angélica Celaya as Constantine's lover Zed.

"We wanted a more dynamic relationship, as opposed to someone who is a teacher/mentor and a student," says executive producer Daniel Cerone. "It just didn't feel as fertile and rich of an area as just a strong man and a strong woman who are both very different." One of the biggest problems the team had with Liv as a character was that she was very reactive; it's hoped Zed will be more of a foil for Constantine.

Cowboys and Vampires [http://www.imdb.com/name/nm1918575/?ref_=fn_al_nm_1], and briefly appears in Dallas and Burn Notice, among other credits.

Zed appears in the source's continuity as part of Jamie Delano [http://www.jamiedelano.co.uk/]'s run, as does Ravenscar asylum and a host of other things hinted at in the trailer. In the source - without giving too much away - Zed has a secret that eventually lands Constantine right in the middle of a rather more saintly conspiracy than he's used to. Whether or not NBC sticks with that storyline is an open question; though if it does there's a chance that we'll see an adaptation of When Johnny Comes Marching Home, one of my favorite one-offs, so here's hoping ...

Though nobody was willing to come out and say it, Liv may go [http://www.hollywoodreporter.com/live-feed/constantines-lucy-griffiths-exits-nbc-717266] the way many of Constantine's friends do, which option has the advantage of allowing the team to keep most of the already filmed pilot. "One of the hallmarks of John is his friends drop like flies," says executive producer David Goyer. "It's the price of doing business. He is this classic noir character who often ends up alone, and we thought it was consistent with the character."

The production team also touched on the subject of smoking - Constantine smokes, but don't expect to see much of it on screen - and the character's bisexuality. Though a recurring plot element in the later books, NBC has no plans to explore Constantine's bisexual side any time soon.

Translation: we are not going to let him smoke but here is a characters from the books. See, we are doing a faithfull adaptation!!! Please watch it. Please..........

I will still give it a go but I can safely say that I have never enjoyed a single thing that David Goyer has been envolved in so I am not holding my breath wich is a ***** because I am a big Constantine fan.

Are they reshooting the whole pilot, or what?

This kind of makes me think it was leaked on purpose, you know. I know people who watched it say this Liv is pretty much the centre of the show and the motivation for everything John does.

But, I've said it once and I'll keep fucking saying it until I'm blue in the face: This show should have gone to HBO. Even though I have my own issues with HBO...

Yeah, it's totally not fertile for a man to be in a mentor role to a minor/younger character, female or otherwise...

Maybe it's just me (it's not), but I would really enjoy a show aimed to be adult and having the previous relationship between its cast instead of an actual relationship. I get that it helps at putting both characters on equal footing, but that can be done without the whole "eeeiiii, they're together".

Although oddly enough killing a character off as part of a relationship is entirely normal within most TV standards, so maybe it's for the best if she's not sticking around for long. Whatever, yo.
M

*places money down
Here's betting that there's an uproar about the decision not to play up his bisexuality..

Makabriel said:
*places money down
Here's betting that there's an uproar about the decision not to play up his bisexuality..
Click to expand...

honestly I didn't realize he was bisexual.

Sooooo the most white washed version of constantine that could possibly be made. I feel the presence of michael bay and Spike lee here......

Speaking as a fan of the comics fuck this show. I wasnt really looking forward to it to begin with though so theres that.
A

Makabriel said:
*places money down
Here's betting that there's an uproar about the decision not to play up his bisexuality..
Click to expand...

honestly I didn't realize he was bisexual.
Click to expand...

Its a matter of some debate. The whole thing is based on 1 panel in the entire run.

. Its not a surprised that you missed it. Its never been a main thing.

And as I understand, Ellis' run is one of the less popular ones. But hopefully they play up the "his friends tend to die off" aspect of Hellblazer - have Liv be catalyst or sacrifice for something that deals with for-now BBEG.

At least they'll have him smoke now and then, but guess they'll only do it in passing shots, but at least its something towards trying to honor him, its not like it promotes the death sticks damn it all! He gets cancer dear lord TV shows are hard!

albino boo said:
Its a matter of some debate. The whole thing is based on 1 panel in the entire run.
Click to expand...

And the Ashes & Dust story with [a href="http://hellblazer.wikia.com/wiki/S.W._Manor"]his relationship with Manor[/a]. Sure, a little less than straightforward, but it still happened.

albino boo said:
Its a matter of some debate. The whole thing is based on 1 panel in the entire run.
Click to expand...

And the Ashes & Dust story and [a href="http://hellblazer.wikia.com/wiki/S.W._Manor"]his relationship with Manor[/a]. Sure, a little less than straightforward, but it still happened.
Click to expand...

Ah ok, I stopped reading it sometime during Garth Ennis's second run in the late 90's. They obviously went on and developed that more later. Sounds like something Constantine would do, especially in the 70s. It did say odd boyfriend after all.
Show hidden low quality content
You must log in or register to reply here.
Share:
Facebook Twitter Reddit Pinterest Tumblr WhatsApp Email Link
Top Bottom