No Right Answer: Is Going to Space Worth It?

Is Going to Space Worth It?

Kyle and Chris are both going to be Dads, and as such it's time to consider the future. Can't have the future without space travel, but is that a good thing?

You just made a blood enemy of Neil DeGrasse Tyson.

This debate is poorly named; It's less "Is going to space worth it?" and more "Could we feasibly live in space?"

Also, overpopulation isn't really a good argument for going to space, at least not in the forseeable future; It's way easier to develop sustainable living on Earth than it is to terraform even the tiny percentage of another planet so that it could support human life independently. Sure, I'll buy that in a millennium (maybe a few centuries less) we might have actually hit the peak of the Earth's carrying capacity, but right now becoming more efficient is way easier and smarter than trying to spread inefficiency. 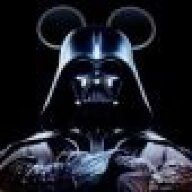 Earth is the cradle of Humanity but every child must leave his crib one day or another.
If mankind don't, mankind will disappear.

No matter how badly we fuck up the Earth it will never be as inhospitable for life as the Moon or Mars are. Even after complete nuclear annihilation Earth would still be a paradise compared to any other planet we know of. Let's stop pretending that somehow space exploration is an adequate solution to our problems here.

That said I think space exploration is totally a worthwhile endeavor for many reasons, it sadly just isn't high on our list of priorities right now.
W

I am insulted at this video. It was like you were purposely trying to make dumb arguments.

Reasons to go to space:
1) Not get killed by Asteroids
2) Asteroids have lots of really rare things that would be good to have on Earth like Platinum
3) Satellites (they never specified manned space missions)

I just debated both sides better than they did, by a lot.

Really, Chris? You don't know ANY facts about this appearantly.
Maybe hate a little less on science and read some more up on it.

For instance, Mars AND the Moon have water: On September 24, 2009 NASA announced the discovery of water on the Moon.
Something to maybe skim over: http://en.wikipedia.org/wiki/Colonization_of_the_Moon

Yeah, I've got to give this one to Kyle, hands down.

That being said, congrats to both on their impending dad-hoods!

Mars doesn't have a magnetic field.

We'll never create a sustainable anything out of that place.

Like it or not, we're not a self sustaining species - We exist because the planet we inhabit allows us to exist. The reason we are what we are is because the Earth shaped us over millions of years. And if the Earth goes, we'll likely go with it.

Not that it isn't nice to dream.

One more vote for Kyle, the problem is money. 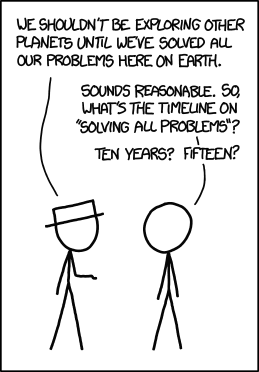 Earth is such a rich planet, just fit for sustaining higher life forms such as ours. Yet mankind's primitive, egocentric and greedy economical organization has pillaged and sullied Earth's very rare and delicate life support equilibrium. With no concern for other species', nor our own, survival. Do we really want to spread out this venomous, cannibalistic society through the universe? Is it not a development plan always meant to fail? To cause disparity, injustice and poverty? To end in territorial war?

The exploration of space needs a more socially evolved mankind to have any kind of success.

I'm REALLY trying to understand why I am such a huge fan of this show. I feel like I shouldnt be, or there is not a big enough reason to be such a fan, but I think you guys are simply that likable. I just love watching you guys banter, your mood is extremely contagious.
V

Why are they discussing a question with one very obviously right answer?

Have they forgotten what their show is titled?

EDIT: What the hell Chris? There's tons of water in space. That shit is plentiful. It's not all in liquid form, but there's no shortage of it.
Y

Humans can't survive in space because of eye damage.

And cancer due to radiation ( http://www.esa.int/Our_Activities/Human_Spaceflight/Astronauts/Living_in_space )

Especially when most of those who have gone into space have spent only 6 months or less there.
E

Is it just me, or was this the angriest debate on No Right Answer? Admittedly, it is a more important debate than Ninja Turtles V. Power Rangers.
U

this was the worst no right answer episode i've ever seen. i've never seen less informed arguments than this. for a moment i thought i was watching fox news. it was just cringinly bad to watch. my science heart still aches...

i also agree that this episode has the wrong name. they're not debating if it's worth it but if it's feasable... 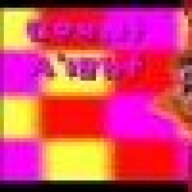 Eh. Sure our future is in space but we don't care and when we need to do it, it will be far too late.

Personally I want to be a Martian ice miner but that will never happen. How awesome would it be to have a job cutting massive slabs of ice with like a plasma torch?!?! 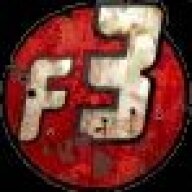 Wow. Neither of you could do even a little research about this beyond watching scifi movies? 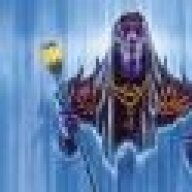 Okay, seriously did no one do research at all on this?

TheMemoman said:
Earth is such a rich planet, just fit for sustaining higher life forms such as ours. Yet mankind's primitive, egocentric and greedy economical organization has pillaged and sullied Earth's very rare and delicate life support equilibrium. With no concern for other species', nor our own, survival. Do we really want to spread out this venomous, cannibalistic society through the universe? Is it not a development plan always meant to fail? To cause disparity, injustice and poverty? To end in territorial war?

The exploration of space needs a more socially evolved mankind to have any kind of success.
Click to expand...

Hello friend.
The universe is home to things that explode a lot. Like Stars. Remember those? Yeah those fckers have probably killed more living things than Humans did and ever will. Earth itself has murdered most of its creations. Heck, most species on earth are getting by with a lot of killing.
Add to that the incredible number of "low probability but with total ruination" events that the universe regularly throws at things inside of itself. Like big rocks. The universe sure likes to have rocks hit other things....


Currently, only humanity has made it to a point where all the things that kill everything are even understood, let alone developing the capability to do something about it.

Life as we know it on earth is flat out incompatible with what the rest of the universe is mostly made of: Things that kill shit by just being there.

Has vacuum ever made an attack against someone, like a human? nope. But it will sure as fck kill you if you step into its presence unprepared. You might have learned that there is a whole lot of vacuum. And when there is not, something more killtastic has taken its place.

You can blabber about how humanity is such a scourge on this poor blue planet (that has survived at least 3 apocalyptic events and is still rocking a fckton of life) all you want but there is on immutable fact you ignore:

Its humans that have begun developing Technology, science and an understanding of how the universe works. Its humanity that will eventually fix its own errors, its science and technology that will spread a part of earth wherever humans will go.
Whatever mistakes we as a species, as a civilisation make - at some point we will fix them.

I can't subscribe to your humanity scourge crap. If i'd believe that i could not wake up in the morning and go to my cog in the machine job.

I believe that humanity will correct itself because at some point the immutable fact that the universe is a killing machine will get into peoples heads. Our current dicking around is unsustainable and the facts will force a course shift.
Show hidden low quality content
You must log in or register to reply here.
Share:
Facebook Twitter Reddit Pinterest Tumblr WhatsApp Email Link
Top Bottom