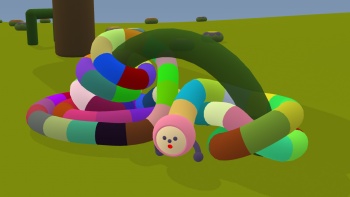 Like most folks who downloaded Noby Noby Boy off of the PlayStation Network this past week, I still can not fully explain what it is that I played. I spent a good two hours visiting bizarre locations, stretching Boy into space, turning people into poop, snapping Boy in half and forcing him to eat his own butt to put him back together again. That said, Noby Noby Boy is awesome, and now, there's even more of it to enjoy than ever before.

In the game, players can report the length of their Boy to a space faring entity known only as Girl. As players across the PlayStation Network do this, Girl comes to represent the total length acquired by everyone and stretches out to find new planets. Early this morning, Girl reached her first destination, the Moon [http://playstation.joystiq.com/2009/02/23/noby-noby-girl-hits-moon-unlocks-new-level-for-all/], with nearly 400 million meters traveled in just four days. So now everyone has a whole new rock to explore, filled with brand-new, though still randomly generated levels to stretch about. Did you know there are penguins on the Moon? Me neither.

Next up, Girl gets her ass to Mars and as you can see, the floodgate of Total Recall [http://www.imdb.com/title/tt0100802/] jokes has already been opened.

Woo! Off to Mars!

I wish I could play this. It's like back when I had an Xbox and everyone was raving about Katamari on the PS2. Eventually, a friend gave me her PS2 and I was able to experience it for myself - a game that has to be played to understand what makes it awesome. I imagine this is the same way. Someday...

And trippier than anything I've bought for $5; and that's saying a lot if you know what I mean.

I still have no idea what I'm doing when I turn on that game(?) all I know is that I can't wipe the smile from my face. I had no idea what girl is for (thank you for the info) and I didn't know we were working our way to the moon.
Show hidden low quality content
You must log in or register to reply here.
Share:
Facebook Twitter Reddit Pinterest Tumblr WhatsApp Email Link
Top Bottom