MadWorld is about slaughtering people, lots of people. And as such, MadWorld is the next logical evolution in the brawler genre. Of course this only makes sense since the game was designed by ex-Clover staff, the team responsible for God Hand. Final Fight had fists; MadWorld has a chainsaw arm. Double Dragon had bats; MadWorld has bats with enormous spikes protruding. To top it all off, MadWorld is on the Wii and makes liberal use of the motion controls to facilitate all kinds of dismemberment.

MadWorld is about a world in which life is an ultra violent reality show in which you are a contestant. And that's basically it. This game is not about the story.

Visually, the game looks like a heavily stylized black and white comic book brought to life. The exception to this rule is the blood, which is really red. One thing I did notice was that because the world is essentially cell shaded in black and white, this does lead to confusion at times about where and what is going on.

The gameplay is a lot of fun, and Platinum Games seems to understand that the Wiimote is not a controller to build a really precise action game around. My time with the game consisted of me chain sawing people in half, repeatedly impaling them against spike covered walls and playing a mini-game that involved throwing as many enemies as possible into a trash compacter lined with, you guessed it, spikes.
MadWorld embraces the fundamental chaos involved in vigorous Wiimote waggling and provides a control scheme that, while forgiving, works given the imprecise nature of the brawler genre.

It works, then? That's good. Not that I had any doubts about a game from ex-Clover staff, but it's still great to have some confirmation. 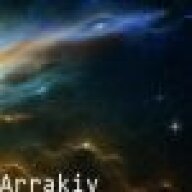 Saw this a while ago. It amuses me, in that this isn't what I think of when I think of a Wii game.

If it's anywhere near as good as God Hand I'll not sell my Wii to play it.