PAX East 2010: The Closing Omegathon Battle At The "Real PAX"

PAX East 2010: The Closing Omegathon Battle At The "Real PAX" 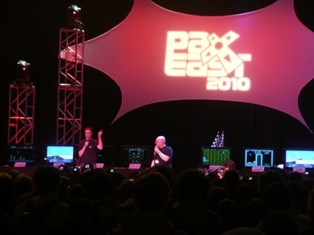 The closing ceremony showcased the climactic battle of the Omegathon competition and Jerry Holkins' admission that PAX East was the "real PAX."

At each Penny Arcade Exposition, there is a competition called the Omegathon which pits gamer against gamer in a battle of nimble fingers and iron nerves. PAX East 2010 was no exception and 32 randomly picked gamers competed in 4 rounds, with the new twist of being placed in 16 teams of two. The pairs first tackled Mario Kart: Double Dash and in round two the game was Geometry Wars. After a semifinal rhythm game, the final challenge was revealed to the gamers who had made it that far as well as the captive audience at the closing ceremony by Mike Krahulik and Jerry Holkins: a classic gaming relay. After the winners were crowned, Krahulik and Holkins thanked the crowd and said that PAX Prime had to wrest the mantle of the "real PAX" back from PAX East.

As was the case at many of the demos, panels and events at PAX East 2010, there was a significant wait in line for the closing ceremony. There was a designated queue room in the bowels of the Hynes Convention Center in Boston and thousands of geeks passed the time sitting on concrete floors by playing Magic Cards, their DSs or the occasional board game.

Evil Genius games helped the wait by putting on a show of sorts by live typing funny quips on several projected screens to introduce mini text games. By texting to a special number, gamers could answer trivia or pick which funny Youtube video would be played. There was also a memorable dance contest between a comely lass dressed in thigh-high red boots and a corset (the Evil Genius typist referred to her as Lady Gaga) and a portly Asian male teenager. Only at PAX East would the enthusiastic teen win out over the obvious beauty, but he was honestly the better dancer. Even with the many distractions, the waiting still became interminable. The listed time for the closing ceremony was 5pm but the event didn't start until almost an hour late.

Finally, as Bohemian Rhapsody triumphantly played on the sound system, the line began to move and the sea of nerds made its way to the main theater. Holkins and Krahulik took the stage and introduced the competing teams, then they got right to the battle.

For the relay, one member of the team had to complete an objective in an 8-bit videogame, and then the next member took over at a different console to attempt another challenge. The first player then did objective #3 and the final challenge had them the pair compete together in co-op mode. Both teams would be racing to finish simultaneously and Holkins and Krahulik gave color commentary. The objectives were as follows: collect 50 coins in Super Mario Bros., earn 1500 points in Rad Racer, complete 10 lines in Tetris and then defeat the first boss in Contra. And yes, they did use the Konami code to unlock 30 lives, but that ultimately caused technical problems and the first run through the relay had to be reset.

Apparently, the Konami code causes the console to freeze the game after a certain amount of time. Penny Arcade business manager, Robert Khoo, had to come out on stage to figure it out and he volunteered to manually enter the code before the teams got to the fourth objective.

The second try held no technical glitches and the winning Omeganauts claimed their prize: a trip to Germany. After giving the winning team its time in the spotlight to soak in the crowd's adulation, Holkins kicked them off the stage by saying, "Okay, that's enough. It's not the Omeganauts Expo."

"Not here," Holkins quickly said, referring to the Hynes Convention Center. "We'll get a bigger place."

For everyone who had to wait in line every time they had to pee at PAX East 2010, let alone play a game, that was a welcome sentiment.

Hehe, Closing statement made me giggle.

Well, it certainly sounds like wait was worth it =D 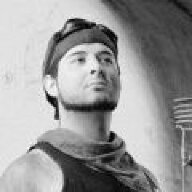 Seattle, the birthplace of their event, may not be the "real PAX" in the future? If they think that much of their hometown, my Labor Day debate of PAX vs. Bumbershoot may have gotten a lot easier.
A

The second game *was not* Road Rash but Rad Racer. Road Rash is a Sega Genesis title.
B

I assumed that any recount of this event would include how abysmal the finalists were at these games. It's as if they were learning how to play Tetris right there on stage, and had never actually seen past the first pipe in 1-1 of Super Mario Bros. I bet much of the audience was clenching their fists in frustration while watching these guys.
Show hidden low quality content
You must log in or register to reply here.
Share:
Facebook Twitter Reddit Pinterest Tumblr WhatsApp Email Link
Top Bottom