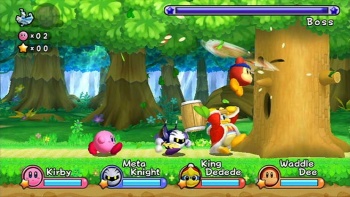 No Right Answer's Chris Pranger shares some of his experiences from PAX Prime 2011.

Was anyone else a bit surprised when a new Wii Kirby game quietly got announced at E3? I had no clue about it until a friend sent me a YouTube trailer telling me that he was considering purchasing a Wii just to play Kirby's Return to Dreamland. Why? Because it's an actual Kirby game where Kirby does, you know, his signature thing of eating enemies and copying their powers. Thankfully there was a demo set up at PAX, and even better, there was virtually no line. How in the heck does that happen? Here are my impressions of the game.

Kirby's Return to Dreamland is like taking Kirby's Epic Yarn and smashing it into New Super Mario Bros Wii. You can play with four players simultaneously with the first player always controlling Kirby, complete with the inhale/copy abilities that have been missing for no good reason at all. Joining him are King Dedede, Meta Knight, and Waddle Dee, thus making Kirby's Return to Dreamland surpass New Super Mario Bros Wii in terms of "well duh people want better choices than Mario, Luigi, and two Toads."

Immediately with four players you discover that the game is ... oh how can I put this lightly? Overwhelmingly easy. At the end of the relatively long level there was a boss fight with Whispy Woods, as is the case for most Kirby games, and while he's usually pretty simple, the strategy here revolved entirely around "everybody hammer the attack button as fast as possible." No need to dodge attacks and wait for specific openings; nope, just keep pressing the attack button until the boss' health bar is entirely depleted.

This doesn't mean that it isn't fun to ROFL-rape all the enemies on the screen though. The level was all about showing how Kirby can copy abilities again, and even get a hold of super copy abilities such as a giant sword or a flaming dragon summon that burns trees down. Kirby games have always been "easy" in terms of straightforward difficulty, but the point of Kirby has always been firmly planted in fun and variety of attacks, which his new Wii game has plenty of.

Some aspects seem a bit odd though during gameplay. For instance, all four characters are capable of infinite flight, but they have the option of hopping on each-other's backs and riding around, even being capable of stacking all three other players on to one as they just skip through the level. I'm all in favor of the option to work cooperatively, but this just seemed like a needless addition since the demo didn't give an obvious use for the action other than to cause confusion when you accidentally jump onto another player and find yourself just hitching a ride.

Regardless, I found myself having fun, as did my team of three other players. My wife, who had previously never played a Kirby game, was enjoying smashing the landscape with a "Giga Sword" and mentioned that we could buy the title if we wanted. This is the sort of gameplay Kirby is great at, and I'm happy that it's back here once more.

The demo was still very simple. There wasn't a big variety to the enemies or the platforming, and it felt like all you needed to do to progress was to just keep walking forward and swinging you hammer or sword or whatever you happened to be carrying. Granted, this was also a demo of, like, the first level, so take that for what it's worth.

Instead of doing another game in the graphic style of Kirby's Epic Yarn, Kirby's Return to Dreamland looks about as plain as a Kirby game can look, by which I mean it looks pretty, bright, and colorful, but it doesn't have any special artistic style thrown in for sake of personality. I'm perfectly fine with it though as it looks essentially like a graphical update to Kirby 64, a severely underrated game from my childhood.

Those looking for another hardcore Wii title, well, wait for Skyward Sword in November. However, for anyone looking for an enjoyable game to play with friends, Kirby's Return to Dreamland has an expected October 24th release date. If you're a Kirby fan, you're already pre-ordering, aren't you?

They're getting there... Maybe some day all four characters will actually be cool. 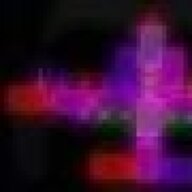 We finally get a four-player multiplayer 3D-Kirby game after a long while. Heck, the closest game to this style was Kirby 64. I just wish they would bring back the mix-abilities. Now, let's see how fun it will be
A

the most I remember of waddle dee's attack capabilities was the first one in kirby's dreamland where I tried to jump on it and got hurt... it also died in the process...
(there was also that one in super star ultra's boss rush mode that did NOTHING, you either ran into it for minimal damage, or inhaled it)

waddle doo I could understand with the lasers, but waddle dee? 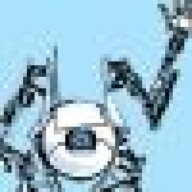 Oh, he's back for real this time. Good to know / It's about time.

Does the word "rape" really need to appear in an article about Kirby?
B

Yay, another great game to add to my collection of Wii games! This and Skyward Sword are easily my two most anticipated games now this year since Deus Ex is already out, and even then they were both more anticipated than that.
M

Chris Pranger said:
This doesn't mean that it isn't fun to ROFL-rape all the enemies on the screen though.
Click to expand...

I'm surprised and disappointed that the Escapist apparently regards a phrase like that as acceptable for publication.

Chris Pranger said:
If you're a Kirby fan, you're already pre-ordering, aren't you?
Click to expand...

Well, no. I want to play this, but there are so many other games I want to play more than this first. I'm absolutely not going to forget to pick it up at some point, though! 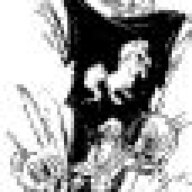 I wonder if this is going to have an unnecessary wait to purchase in Australia like Epic Yarn. The lack of any reference to a release date for anywhere other than NA and EU worries me a bit.

messy said:
Does the word "rape" really need to appear in an article about Kirby?
Click to expand...