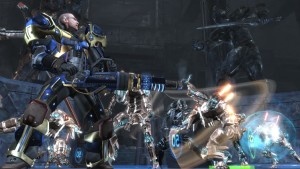 Legendary game designer Peter Molyneux feels sorry for Denis Dyack of Too Human [http://www.xbox.com/en-US/games/splash/t/toohuman/] fame, saying he's been in Dyack's position and knows how easily pre-release publicity can spin out of control.

Dyack, president of NeoGAF forum [http://siliconknights.com/] claiming he had such great faith in the game that he would allow his account to be tagged "Owned by GAF" if it failed to succeed.

In July, Dyack followed up that move by saying in a Unreal Engine 3 [http://www.1up.com/do/minisite?cId=3149993] and Epic's refusal to properly support it.

But in an interview with VideoGamer.com [http://www.videogamer.com/news/23-07-2008-8890.html], Molyneux expressed support for Dyack, saying his own experience in similar circumstances gives him a unique perspective on Dyack's actions. Calling Too Human a "good game," he said, "What I realize over time is that talking about a game before it's released is a dangerous game. You can just say a few things wrong and then it's like an avalanche."

"I feel sorry for Denis Dyack because you know, I think a few things were said wrong, there was that really unfortunate showing at E3 a few years ago. Everyone got on the bandwagon of saying things about Too Human," he continued. "Now I've played it and, you know, it's a good game. It doesn't deserve a lot of that harsh criticism. But as soon as something starts it's very hard to turn the tide and pull it back again. Unless you've got something in your back pocket to say, 'Aha, but what about this?' then it's really really tough."

Too Human is set for release on August 19. VideoGamer's full interview with Peter Molyneux can be read here [http://www.videogamer.com/xbox360/fable_2/preview-1108.html].

In a lot of ways I agree, and forums are definitely damaging. I enjoyed the Too Human demo quite a bit [http://www.gamertagged.net/blog/2008/07/18/too-human-demo-impressions/], and I also think it's a good game. However, I've seen such relentless perspectives on it, partly because people truly are playing it wrong, and partly because people don't like how it's trying a different approach.

Gamers ***** constantly about wanting a new experience, but when a studio tries to deliver it, they tear it to shreds because it's different. Or they tear it apart because it isn't flawlessly executed, which something new is NEVER going to be flawlessly executed the first time! Of course games like Assassin's Creed and Alone in the Dark are going to be problematic. They're trying something new, after all. And now Too Human is trying something new, and people are ripping it to shreds for it.

I honestly hate most forums because other gamers just sicken me. Too Human is going to be a great game, but it'll be a failure on the market because it's something different.

Denis Dyack has been his own worst enemy during this whole forum fiasco. While I understand a certain amount of developer promotion is necessary, Too Human has become inseparable from his public persona.

At some point in the build up to release a game needs to speak for itself and Denis never allowed Too Human to do that. Instead it's about the forums, the Epic Lawsuit, the one console future, etc. During this whole process Denis has talked about everything but Too Human and, to me, that comes off as purposeful misdirection, which raises red flags about the quality of the game.

Whatever the game's merits Dyack's behavior has, in classic Cruisian couch jumping fashion, irreparably sabotaged its name in the public perception.

I think Dyack and Silicon Knights are mostly just stupid for releasing Too Human as a sort of overpriced vanity project instead of the Eternal Darkness sequel everyone REALLY wants from them.

It sounds to me like Denis is just frustrated over some of the reactions he's getting from the community, and that frustration is leading him to make some unwise, unconsidered statements. It's easy to fall into the trap of being too defensive when dealing with a property into which you have sunk hundreds of hours of work. While game development is a business, developers don't make games just for money. There is a lot of love and sense of self poured into any true creative process. Attacking that labor is usually perceived as an attack on the creators, and can lead to knee-jerk reactions that probably should not have been made.

In truth, Denis should have just declared a moratorium on forum posts for the entire company after a certain point, and concentrated on just making the game. The way it is now, Too Human could be the greatest revolution in gaming since Wolfenstein 3D, and it would still get a huge amount of hate from segments of the gaming community. That's the price of controversy, you never can get past the initial impression. There are plenty of people out there who will hate on the game just to make themselves feel "cool" or "superior". Personally, I'd rather wait for the actual game and judge it on its own merits. I'm just ignoring the hype.
C

PedroSteckecilo said:
I think Dyack and Silicon Knights are mostly just stupid for releasing Too Human as a sort of overpriced vanity project instead of the Eternal Darkness sequel everyone REALLY wants from them.
Click to expand...

Honestly, if Silicon Knights doesn't allow time to pass, Eternal Darkness 2 will not make nearly as much of an impression as the first, and people will be disappointed. Think about it. What made the first game great was all the ways it messed with the player. In order to create an equally ground breaking experience, time needs to pass.

So I say wait until the time is right for Eternal Darkness, and until then let them make Too Human.
S

The only beef I have with Denis Dyack is why did you have to make it a trilogy. It would be perfectly fine if it was one huge epic game, but no you have to split it up into 3 parts. Now this first game with so much hype is going to be pummeled to the ground for making us wait this long only to find we have to wait another year or two to get the entire full game. I know they're going the .hack approach, but waiting so long for this game is not worth it.
M