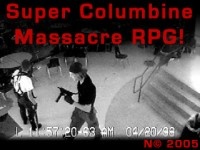 A new promotional trailer has been released for Super Columbine Massacre RPG! [http://www.playingcolumbine.com/index.htm]

Produced by Slamdance 2007 Guerilla Gamemaker Competition [http://en.wikipedia.org/wiki/Danny_Ledonne], the movie is intended to "examine the issues surrounding th e future of videogames as an art form and how one game has touched upon the larger development of an emergent form of expression."

The movie features appearances from a wide range of people, including game journalists, developers, university professors, students, two survivors of school shootings (including Columbine) and Jack Thompson. According to the web site, a "rough edit" of the film is now in progress.