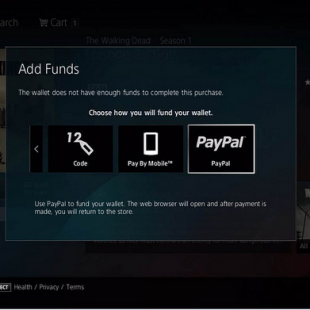 Shopping on your PS3 just became a bit easier thanks to new PayPal options for the PlayStation Store.

About a month ago I lost my debit card on the bus. On the whole it was a hassle, but the whole ordeal was pretty much over after a quick trip to the bank. At least, I thought it was. The dark specter of mild inconvenience reared its ugly head a few weeks later when I logged onto the PlayStation Store to take advantage of a sale. I went to pay and was swiftly met with an error message reminding me that my card on file, the old one, had been cancelled and I would have to enter a new one to add funds. Not wanting to leave my couch groove to trudge upstairs and grab my wallet, I abandoned the sale.

Luckily for gamers everywhere, my fate no longer needs to be a shared one. This is because Sony has announced that the PS3's PlayStation Store will now support PayPal as a valid payment option, removing the necessity of a credit/gift card. The new PayPal funding options will allow gamers to add as much as a $150 to their PS Store wallets with their PayPal accounts and can be used to "purchase games, add-ons, movies, TV episodes and more."

The new PayPal funding options come only a short while after the addition of mobile billing that allowed gamers to add funds to their wallet using a over the internet. The new PS3 options basically just streamline the process so you can do it all without the aid of any other devices. Even so, I consider it a win for lazy gamers everywhere.

Great, so when Sony is hacked again, people's paypal details will be taken too!

Wait, so are non-master accounts finally able to add funds and buy things on their own? Because that would be great.

It's convenient, but I found it's cheaper getting PSN credit off of Shopto 'cos it's like 20% cheaper than actually buying directly.

Dunno how much I feel like using the store now since within 3 weeks of having a Vita I lost £22 of my £25 credit cos someone hacked my account and bought crap loads of DLC. Oh, and Sony have some crappy policy where they blame the customer if anything like it happens and refuse to give a refund.
(Even though Apple or Googles to name a couple will refund fraudulent purchases).

Not in a Sony-liking mood at teh moment.

This is excellent news for me. I no longer have to buy overpriced US/Japanese PSN codes off internet sites in order to purchase games on the US/JPN PSN.

I'm pleased by this decision Sony, it's made my life a lot easier.

Evil Smurf said:
Great, so when Sony is hacked again, people's paypal details will be taken too!
Click to expand...

This actually adds a 2nd (and well proven) wall of protection. Also the rage against Sony was misguided, all systems can be hacked if someone tries hard enough. It just comes down to when and who is crazy enough to take the risk of getting caught. Sony was the unlucky one to be targeted first, they aren't the only ones.
Show hidden low quality content
You must log in or register to reply here.
Share:
Facebook Twitter Reddit Pinterest Tumblr WhatsApp Email Link
Top Bottom