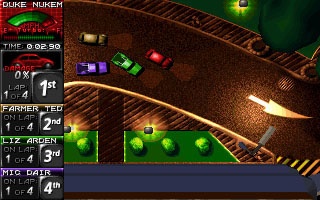 This is cool: Death Rally [http://www.remedygames.com/]. This is cooler: It's completely free.

You might remember us mentioning a couple weeks ago [http://www.escapistmagazine.com/news/view/95386-Remedy-Files-New-Death-Rally-Trademark] that Remedy had filed a trademark for a new version of Death Rally, a top-down racing game in which guns and speed go hand-in-hand. While gameplay in Death Rally was simple, it offered a surprising amount of depth, including a wide selection of tracks and opponents, upgradeable cars, an underground market, hidden bonuses and more. It was originally published by Apogee and even included an appearance by none other than Duke Nukem himself.

Rather than putting out an all-new game, however, Remedy's Oskari Häkkinen described the project as "a sweet, small thing" for fans. And that's exactly what it is: The "semi-update" looks, sounds and plays exactly the same as the DOS classic but has been overhauled to install and play flawlessly on current versions of Windows, including XP, Vista and Windows 7.

The game wasn't actually updated by Remedy, which is going full-out on blog [http://www.alanwake.com/] that he might have an interest in pursuing similar projects for other games, such as Dune, Outcast and the Looking Glass Studios classic Terra Nova, although their legal status remains hazy.

Speaking of which, I'm not sure how Remedy's freebie overhaul jives with 3D Realms' update of its back catalog, announced earlier this year [http://www.escapistmagazine.com/news/view/92002-3D-Realms-Remasters-the-Classics-in-Major-Store-Update] and which includes Death Rally for $5.99. Hopefully there's no conflict; the two companies have a long-standing relationship and it'd be a shame to see trouble erupt over what's really just a cool bit of fan service.

And Death Rally does in fact perform flawlessly; I had it installed and running just a few seconds after the 42 megabyte download was finished, and I was totally sucking at it mere moments later. But no matter! It's quick and simple fun, just what you'd expect from a game that spent 13 weeks at number one on the Top Ten chart at Happy Puppy - the world's most popular gaming site, don't ya know! So grab a copy and take it for a spin yourself at death-rally.com [http://www.death-rally.com].

Awesome, I would grab a copy if I didn't already have a copy!

Downloading it now. God it's been AGES since I last played this game. Can't wait to take it out for a spin once more.
I

Still have my original copy stashed away somewhere, was a good game.