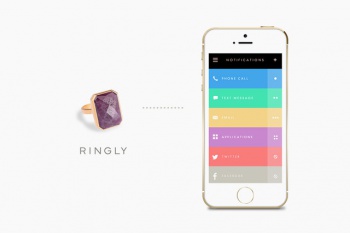 Cocktail ring "Ringly" connects to smartphones via Bluetooth and will send the wearer a notification via light or vibration for new phone alerts.

While companies like Samsung [http://www.escapistmagazine.com/news/view/135061-TrackingPoint-Makes-Google-Glass-App-for-Shooting-Around-Corners] are pushing for wearable tech with glasses and watches, there's another company entering the fray, and it's introducing Bluetooth-enabled rings. Founded by former Flickr vice president Christina Mercando who ventured to make wearable tech that's actually stylish, "Ringly" (also the name of the device)is a ring with a stone that links to your phone and alerts the user when a new call, text, social media mention comes in. Once connected to your smartphone, Ringly lights up or vibrates when a notification arrives, and what's more, the number of vibrations and light colors can be customized so you'll know if the new push notification from Facebook, Twitter, Instagram, etc. alert is either from your friend, significant other and whatnot.

Mercando mentions that she had the idea for the smart jewelry since she hated missing text messages whenever she left her phone in her bag, and didn't want to leave her phone on the table during social gatherings.


I continued to miss calls and texts from my friends and family because my phone was in my purse, and I hated leaving it on the table during social outings...I just kept looking at my rings and thinking, "I've got to be able to put technology in here that will let me solve the problem."

Inside each Ringly device is a tiny circuit board that allows the ring to sync via Bluetooth either an Android or iOS app. Presently, Ringly's first release has four stone options matted with 18K gold and will be priced between $145 to $180 for pre-orders, and at retail, will hit $195 to $260 per ring. You can read more and order the device by checking the official site. [https://ringly.com/]

While the device's design is obviously slanted for female use, the company mentions that they want to use the tech it has developed for other wearable designs in the future.

I guarantee this will lead to a buttplug version eventually if one doesn't exist yet...
J

Fortunately, I have these things called 'pockets', which provide me access to the built in vibrating functionality of the phone itself.

Jadak said:
Fortunately, I have these things called 'pockets', which provide me access to the built in vibrating functionality of the phone itself.[...]
Click to expand...

Gaah! I've been ninja'd! Normally, I'd post a foolish picture about this, but the selection for Google images "confused ninja" doesn't leave much pickings.

To be fair though, Women's clothing have no useful pockets. It blows my mind! Drives one of my friends insane, as she's not one to carry a bag around either. So as absolutely absurd and foolish this idea seems, I can actually see it being a big thing for women, or professionals who can't carry their phones with them all the time.

-Dragmire- said:
I guarantee this will lead to a buttplug version eventually if one doesn't exist yet...
Click to expand...

And then there's the cock ring version...

I want to see this happen with piercings though, just to see someone with a nose ring sneeze from it.

I'd say its far more acceptable to leave your phone out on the table than it is to have some gaudy piece of shiong mao niao[footnote]Figured I'd add some Firefly related insults purely because Im reading about the new MMO on the other tab.[/footnote] light up like a Christmas tree on your hand.

-Dragmire- said:
I guarantee this will lead to a buttplug version eventually if one doesn't exist yet...
Click to expand...

OT: I wonder if they'll come in "engagement" sizes...