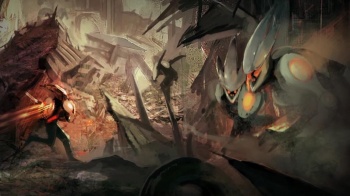 5th Cell is now teasing its next title, which will likely involve dirt and/or aliens.

Now that 5th Cell has released Super Scribblenauts [http://www.amazon.com/Super-Scribblenauts-Nintendo-DS/dp/B003BMJKI2/ref=sr_1_2?ie=UTF8&qid=1287761209&sr=8-2], it doesn't have any announced titles in the works. However, the company isn't going to keep fans waiting to know what it's working on next for long, as it's already given a few hints and thrown up a countdown website.

5th Cell previously teased that its next project would outshine the capabilities of previous DS efforts by using Valve's Source Engine [http://www.escapistmagazine.com/news/view/102858-Scribblenauts-Developer-Teases-Source-Engine-Game], and said it had an Xbox Live Arcade title in the works. Whether or not the two are one and the same is still unknown, but 5th Cell is definitely going to unveil whatever it's working on for XBLA next week.

The studio will be revealing a "completely new experience for Xbox Live Arcade" next Thursday on Spike's GameTrailers TV. A single screen of concept art teased the game on the program last night, which shows a destroyed city with humanoids, and possibly aliens, wearing futuristic armored suits.

In addition, 5th Cell's background [http://5thcell.com/countdown/] featuring a bunch of dirt, footprints, and a strange triangular imprint. A faint hexagonal grid is seen overlaying the background, but whether this is a reference to the XBLA game or to 5th Cell's logo is unsure.

The reveal will take place on October 28 at 10pm PDT, so set your VCRs, DVRs, or video cameras pointed at a television. 5th Cell has recently without fail been developing titles worth taking a peek at, so it'll be interesting to see what it comes up with when not constrained by the Nintendo DS, and perhaps has the Source engine at its disposal instead.

It's clearly a Whose Line is it Anyway? adventure game.

Misleading title is misleading. This looks mighty interesting, though. If only I had a 360.

Super Toast said:
Misleading title is misleading. This looks mighty interesting, though. If only I had a 360.
Click to expand...