Shadow of the Colossus Review (PS3)

During the truly epic and touching final hour of Shadow of the Colossus (SotC), my mind began to run wild with ways to tackle a review, what would be my first review. Why had I never felt this inclination before? Had it suddenly hit me; after 7 years did the multiple Game of the Year award winner and "exhibit A" of the "Games are art" argument finally touch me? Most of the things that can be said about SotC have perhaps been said, so I will provide a perspective of one who hit a crushing wall trying to get into this game for seven years... 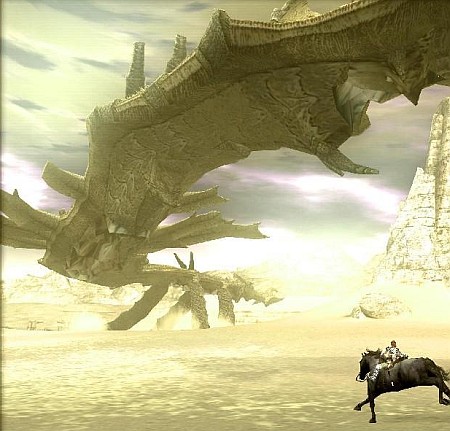 Shadow of the Colossus, the second title developed by Sony's Team Ico, is a strange beast. As a whole, it contains elements of a multitude of other games, yet rests in its own world even after seven years. For any other title, I would approach this review with a strict "no spoilers" policy, an aspect that this game makes wholly irrelevant. The minimalist motif carried over from Ico narrows spoilers down to Colossus strategies and the last 15 minutes of the game. If you happen to be someone like me who couldn't finish the game after all this time, rest assured that this will not be spoiled for you. Hopefully you will gain some perspective that may help you to challenge this game, through rebuttals to complaints that I myself had for years.

A common complaint among detractors of this game is that it's formulaic. It begins with the task of hunting down a colossus, finding it, killing it, and ending up back where you started with the same goal in front of you. I've since learned that this is for a very good reason. The journey to the colossus is truly half the experience, and it helps with the game's pacing. If you cannot enter a mindset where you can appreciate and be taken in by the seemingly never-ending variety of scenery you ride through, this may prove difficult. The world inhabited by the colossi pushed the PS2 to its absolute limit, and this HD upgrade increases the awe factor even further. Much like the PSN title Journey, SotC asks that you take a quiet, lonely, well..journey through various settings full of beauty and digital artistry. This lasts just long enough that by the time you reach the next colossus, you're ready for a change of pace into a loud, thunderous and epic battle with a creature that has every right to consider you a splinter. 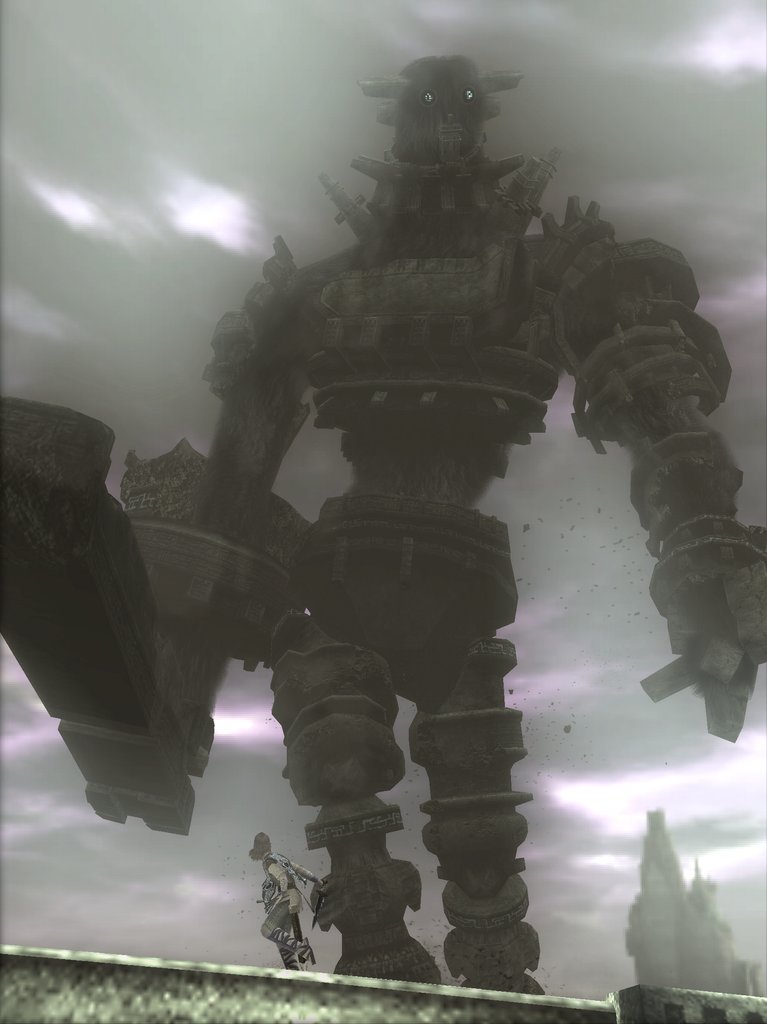 These battles with the colossus are where the true mastery of the designers come into play. They start with a scanning of your surroundings, leading to an "ah hah!" moment of brilliance not unlike the solving of a Portal puzzle. With this knowledge, you are ready to partake in what is essentially an entire level of timing based platforming, reflex skills, and stamina management. If you've hit the wall mentioned above while attempting this, you may have chalked it up to a ragequit from repeatedly falling off or a weird animation that did not correlate to your commands. As devious as it sounds from that angle, I believe the mechanics, controls, and animation are entirely on purpose. These do have failings, as based on traditional standards the game is not mechanically sound. The positive is that they open the doors to perform feats only seen in cutscenes or in the background of a QTE.

I've found that the proper mindset is to appreciate how literally colossal these beasts are, as the perfect orchestral score backs the sheer awesome of actually carrying out a strategy to take this thing down. The earth shakes when it walks, leaving giant craters as it attempts to flatten you. You are meant to fall off and repeatedly come close only to fail, as this is meant to be an epic and monumental task. After an hour long struggle with a being that could have its own area code, inflicting the last slow motion stab is as satisfying as seeing the end credits in many other games.

A negative I can agree with is that the game itself offers little to no information on essential aspects of play. For example, the game became infinitely more fun for me when I realized that I was supposed to be keeping my eyes open for fruit to shoot out of trees and lizards with white tails to eat. There is no message or suggestion within the game that these are important, especially what they do (health and stamina increases). The journeys through the vistas and taking in the atmosphere carried another level when I was tasked to keep my eyes open for the trees and lizards during the journey. The game also neglects to inform you about how to stand on Agro the horse, or how to ride along his sides. The game may be a throwback to the days where step one was to RTFM, a step often forgotten in today's world of one page or even missing manuals. If this review compels you to try this game for the first time or again, remember this paragraph and this important command: The game will tell you that holding L1 will lock the camera to the colossus. It does not tell you that pressing X during this will whistle at it, getting its attention and making many battles much easier or even possible.

All said and done, I'm very glad that I popped in my copy of the HD collection and promised myself to finish it with this information and mindset. The game is a journey that makes the namesake game Journey feel like a small corner pocket of SotC's experience. It masterfully touches a range of emotions through minimalism, allowing you to experience much of the story and the powerful emotion on your terms, visually and organically through gameplay. There was and still is nothing like it, and while it begs to be played on its bare minimum terms, it is absolutely worth meeting the game halfway and allowing it to overtake you.
Show hidden low quality content
You must log in or register to reply here.
Share:
Facebook Twitter Reddit Pinterest Tumblr WhatsApp Email Link
Top Bottom