Switching Xbox Live Regions About to Get Easier

Switching Xbox Live Regions About to Get Easier 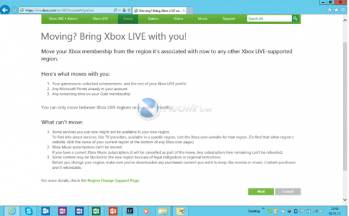 The new Xbox Live region switching tool is slated for a January release.

Those of you who dread the thought of switching your Xbox Live account to a new region, when you move from country to country, now have reason to be cheerful. Microsoft is testing a new service that will make region switching a lot easier.

The pilot program allows for a switch once every three months. When you switch, almost everything comes with you; your tag, achievements, remaining Gold time, and so on. What doesn't always come with you are your services, since there are some - like TV channels - which are region locked, and so may not be transferable. Xbox Music subs can't be transferred either, and there may be some region-specific items, like promotional material, which won't make the cut.

Initial reports indicate that the process is as easy as a few clicks, a significant step up from the six-week trial by fire that users have to go through at the moment. The new system is targeted for a mid-January release.

This is fantastic news! It'll certainly make my move to Botswana a bajillion times easier.

Honestly, I'm not sure why it has to be so complicated in the first place...probably due to a bunch of legal mumbo jumbo I really don't have much care for, but I'm happy to see an improvement in such a service.
K