So there might be a new Mario movie in the works.

I think Disney would be good for it. Dreamworks wouldn't be terrible either.

But I think you best take your complaining to Nintendo since they are the ones who abandoned Hollywood after the first Mario Bros. movie turned into what it did. Also... as cool as Subspace Emissary looked... it was repetitive and lackluster. It could easily be topped in terms of narrative and action. Visually, yeah, it's good. But to say that you might as well watch that implies it can't be done better and, sorry, but it totally can.

seeing the trailer for the original Mario Brothers film made me wanna go grab my dvd copy of it and watch it again.. it may not have been a good Mario movie ,but it was still a good movie. i liked it as a kid and I still like it now 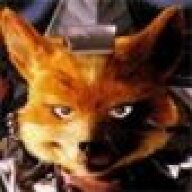 I STILL can't see what's so bad about the Super Mario Bros movie other than "waah it's different I don't like change!"
J

Congrats on not doing a Video Memorial to Ralph Baer. Way to not show your Nintendo fanaticism.

I still want to see a live action Mario movie that is made up of purely or mostly Dwarves.... Or whatever the PC term is for people when never grow above 4 feet tall.

Sorry, I just can't imagine a live-action Mario. It just doesn't work for me. The game is simply too cartoony in its presence, mechanics and presentation that a realistic approach would just be... well, the first Mario movie.
And whatever OTHER franchise is there is not relevant either if their respective base for the adaptation is there to be live-action (e.g. in case of GotG, it is. Besides 'Talking Raccoon', it was basically just a generic sci-fi-flick in terms of the basic visuals)

Now there are obviously franchises that would work very well live action. Bob mentioned Zelda and I also could easily imagine a live-action Metroid movie. They probably could just copy most of one of the prime-plots, cut out a lot of the backtracking and the key-hunt near the end and we got ourself a great starting-point for a Metroid movie!
H

This is the case of most movies, but I believe that if this should even be considered, a LOT of really talentet people needs to be involved..
I mean; Liam Neeson movies doesn't need to be "good" per say, innovative, or even interesting. But a thing like the Mario brothers, need to get more of a Marvel treatment if that makes sense.. People that aren't ashamed about making this, and don't want the "gritty/dark" version, but want to make a good movie!
B

As far as live action videogame movies, I always thought Metroid would be a good place to prove the concept. I'd like to see a large portion of it look like the beginning of Wal-E, steeped in ambiance, Samus trekking silently through a dangerous and inhospitable world. It's not your standard summer action movie, but with the right mix of Wal-E and Predator, it would be a fun movie to get lost in and getting lost in the ambiance is the whole point of the games.

I personal would rather see a company like Disney handle the Nintendo IP's instead of Sony. Sony, at this time, is too much of a mess to make a competent Mario movie and having Avi Arad trying to obtain those rights is a nearly 100% guarantee it will fail. I'd like to see Mario as live action but it needs a creative team that can pull off that universe without dropping the ball like they did with the last outing. Maybe someone like Edgar Wright but I'm just blue-skying at this point.
G

I think the main problem with a live-action Mario is that the central aesthetic of the Mario franchise is it's cartoonishness. Make Mario live action and you'll lose that very thing that makes it feel like a Mario property. It would be like filming a live action Mickey Mouse movie. It's gonna look like Stuart Little (at best), and it's not going to feel much like Mickey Mouse. Further complicating this, the central premise of a Mario game is that he's a guy who goes around and jumps on creatures, smashing them into oblivion while making a "Whoo Hoo!" noise. Unless this is a Sam Raimi style horror comedy, I don't think I want to see that translated into live action.

It's a crying shame that Bob doesn't trust the fungus.

Live-action Kirby would be horrible. As in, horrifying, and I must see it!

I can't honestly see a reason for there to even BE a Super Mario movie. And especially since they're so plot and character lite that anything they try and do with it will be met with

Like, seriously, I don't know how the hell how you could even not be different on some level.
V

I've thought a lot about it too and stuff like Zelda and Metroid would certainly translate well to live-action, but that's because their universe - subject matter, physics, general mood and plotlines - are somewhat grounded. Mario is pure (good) nonsense with no real structure or gravity. I think if it were to work, it have to take a page from its source, Alice in Wonderland, and be more about set-pieces with minimal story. Thing is, we're talking Nintendo and I'll be damned if there's never been a better time for Smash Bros to happen.

A fun thought on hypothetical sequels, world-building, and fan-service: if something else needed to happen, Mario and friends could go meet the characters from Dokki-Dokki Panic in a land adjacent to the Mushroom Kingdom.

The only way I can really see a Mario movie working would be if it's based off of any of the Mario RPGs. The main series of games, with a few exceptions, really don't have much of a story but do at least have more than enough atmosphere that production could borrow those aesthetics but the actual story will need to come from one of the RPGs. Were it my decision, either Super Mario RPG or Bowser's Inside Story.

For all the harshness the creators of the Super Mario Bros movie got (and fairly, that movie is a mess), I still have a lot of respect for the poor guy that was handled a controller and was tasked to turn a game where a chubby plumber dwarf fights through a cartoony world populated by turtles and mushrooms with legs to rescue a princess from a group of evil turtles/dragons, into the script for a feature film with real people. Lets face it, as much as Bob likes to see Mario as the ultimate face of Video Games culture, his adventures are closer to an acid dream than a narrative.

The only way a SMB movie could work is if it follows the anime OVA template, which is: everybody that watches them already knows the characters, names, relationships and motivations of everyone involved, so we don't need to spend more than 2 minutes in setting the backstory (and we don't even need to place it somewhere within the cannon, either). And, then again, Nintendo is so protective of Mario that any kind of arc, flaw or trait other than "too much of a hero" will be considered blasphemy.

The Mario franchise may be big and recognizable, but does it get anyone EXCITED any more? I mean, sure, there are a bunch of guys who grew up with the dude who still love him, and it sells a lot cause it's the sort of game parents buy for their kids, but I'd bet half of those kids open their presents and are mostly disappointed that it's not a Call of Duty game. Thing is, Mario is pretty infantile, and while there's a lot nostalgia attached to him, getting a boner over seeing the character in a raccoon suit or whatever isn't really the status quo. That's what I think anyway.

Was that jab at the 90s really necessary? Or that much more hatred for Amazing Spider-Man?

Anyway...as great as it would be to have a Mario Bros movie that doesn't suck, I don't see it happening. But it does figure that Mario is getting another shot at the big screen.

There's also reports of a Sonic movie in the works that's supposedly is going to be aiming to be darker and gritter with a PG-13 rating. Good lord, please shoot me...

Anyone want to enlighten me as to why MovieBob seems so obsessed with this hypothetical live action Zelda movie? It only makes marginally more sense than the Super Mario one, and they both seem to have many of the same problems.

For a Super Mario movie (a new one, that is), I don't see the point. Mario games aren't exactly known for their great plots or deep characters. The art style is too stylized to transfer to live action, meaning they will have to change it up enough to render it meaningless. Most of the stuff Mario is known for doing would look bizarre in live action.
I just don't really see what would be gained by basing a movie on these titles, other than brand recognition. When basing a movie on established content, there are inherent restrictions but usually advantages that balance it out, so what exactly is being gained here?

Not saying you can't make a descent movie out of them, just that with all the changes they would have to make it seems like they would be better off just starting an original idea.

Just let it go. The movie ruined it forever.
K

I read the post on the blog and the elevator/short version pitches sound like you're pitching me the Bob Hoskins movie. That's probably the biggest issue keeping such a project down. It poisoned the well.

Reading the full storyline is obviously much better but throughout the whole thing, it's pictured in my head as an animated feature. Sorry. I can't get past it without going down the 90's Mario road. Bob Hoskins and John Leguizamo were so perfectly cast for those roles and it turned into utter shit. I just don't feel like those characters ARE human. So it feels like a disservice to try and portray them as human.

However, as an animated feature, I don't picture it as an extended cutscene from Smash Bros at all. I'm not looking at it through the prism of Nintendo's aesthetic style. This is something that would be best brought to life by Blizzard in their Diablo/Warcraft cutscene style. Highly detailed animation with tangible emotional weight but not flesh-and-blood humans.

Zelda on the other hand.... That is begging for an epic live-action feature.

I don't see much of a point in making a Mario movie. Popular culture kind of got over those games, and just accepts them as a thing, so there wouldn't be all that much drive from the mainstream to want to go see it.

I mean, it'd be like making a non-ironic live-action Cinderella movie in 2014-