Everything wrong with the world has been fixed by this ridiculous spectacle.

It's been a rough couple of weeks, with seemingly everyone at one another's throats. I don't know about you but I need something to take my mind off of it OH WAIT HANG ON. The Disney blogs [http://blogs.disney.com/] are kicking off a week of 90s nostalgia and to get started they've recreated the opening titles of immortal (and almost perfect) animated classic Duck Tales using actual ducks and ducklings. And here it is for you to enjoy.

The pedant in me is rushing to point out that Duck Tales started in 1987 and ended in 1990, which means it only caught the very beginning of the decade. But I'm not complaining. I've loved Duck Tales more than I love certain actual people since I was in middle school. Hell, I still kind of hate baseball because where I grew up (Tulsa, OK), the show aired on Chicago-based WGN, which preempted all afternoon cartoons every time the Cubs played. As a result I still haven't ever seen the last 15 or so episodes. I WILL NEVER FORGIVE YOU BASEBALL. Even now, I am fairly certain I could keep watching it nonstop until I starved to death because I forgot to eat. Yes, Duck Tales is my cocaine. This is not a cry for help.

Gimmicks like this have a nasty habit of getting people's hopes up. Could, for instance, this mean Disney will finally get around to releasing a proper home video collection that not only contains the final 25 episodes but also contains special features and so on? Of course not, Disney is the worst at capitalizing on demand for classic stuff. Which is crazy because normally Disney's only purpose is making all the money on earth. Seriously, Disney, just release the damn episodes already. 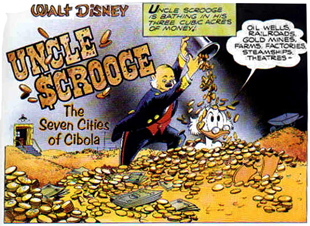 While we're on the subject, some of you might not be aware that Duck Tales was heavily based on the classic Dell Comics run of Uncle Scrooge (1952 - 1962), predominantly written and drawn by Carl Barks. Barks worked as a Disney storyboard artist and writer, mostly on Donald Duck cartoons, during the 1930s. He quit in the early 1940s due to poor working conditions and pay, but found a lot of work writing and drawing stories for Disney's licensed Donald Duck comic books. He would eventually end up shepherding the Duck-family of comics and is responsible for the lion's share of what would later feature large on Duck Tales. He created not only Uncle Scrooge, but also the Beagle Boys, Gyro Gearloose, Flintheart Glomgold (1956), and Magica De Spell as well as the city of Duckburg, among many other contributions.

Due to Disney's policy (at the time) of having Disney products associated with Walt, all artists and writers were largely anonymous, (and nope, they didn't get ownership or royalties either), but Barks' work stood out. He eventually became referred to by readers as "the good Duck artist" owing to the enormous difference in quality and subtlety between his and the other hired guns Disney employed. If that sounds familiar, it's because it's eerily similar to similarly unsung comics legend Bill Finger [http://www.escapistmagazine.com/news/view/135079-Bill-Finger-To-Finally-Get-Credit-For-Batman], arguably the man who deserves most of the credit for creating Batman.

His work was immeasurably influential; among other things, his "The Seven Cities of Cibola" from Uncle Scrooge #7 was cited by both George Lucas and Stephen Spielberg as an enormous inspiration for elements of Raiders of the Lost Ark. Fortunately, Barks would eventually become somewhat famous starting in the 1960s, as comics fandom became more organized. Though he officially retired in 1966, he continued to draw and write comics as well as cultivate a painting career, pursuits which thankfully made him a comfortable living for the rest of his life. He died aged 99 in his California home in the year 2000.

It goes without saying that I highly recommend checking out his work [http://www.amazon.com/s/ref=dp_byline_sr_book_1?ie=UTF8&field-author=Carl+Barks&search-alias=books&text=Carl+Barks&sort=relevancerank].

As ridiculously adorable as that was, I now have to curse you as I had only just got that song out of my head...and now it's going to be stuck on repeat for another 10 years.

...And I was only just thinking about ducks today.

Ok some words. Disney needs to release season 4 of Duck tales on DVD or the whole series on Blu-Ray. It's killing me that I don't have the last season.

I thought it meant that ducks were "singing" it. I'm a little disappointed now D:

Ohmigod that is so adorable! ...And now that theme song's gonna be stuck in my head. Great...

NOW, please, get Disney to release ALL the episodes on DVD/BR.
>>

I was hoping that the ducks would quack the theme. Kinda shame. Still adorable though.

And for those looking for the original to compare to...