The Next Elder Scrolls 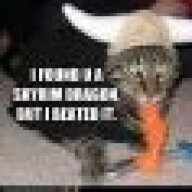 I'm a new guy but im gonna say this Escapist this thread has made me upset mostly beacuse people want an ES game for black marsh and there has already been morrowind a swampy MARSHY type of place and I dont want another reapeat of morrowind and for valenwood theres been skyrim and if you look at the landscape most of it is trees so I really dont like the feeling of another foresty game I like new I dont like re-occuring events but hopfully they dont plunge into dewmer until way later on because dewmer is future type stuff and i dont want to get there yet but if I had a choice of three my top 3 would be :

1) Elsweyr- Mostly because its a new terrain and I like new terrain it would basiclly map out most of the remaning terrain left in Tamerial and it would create a good feeling for spears and things dropped in morrowind.Then hopefully they would add new creatures (not races mabye 1-2 new races) but new animals to ride new ceatures that are more flexble than your average bunny or wolf things like sand demons and gaint sand worms spirts of the sand etc.

2) Summerset Isle- Reason is the isles would be a kinda intro to Elswyer's texture frame give them time to revamp there graphics for sand and palm trees and new races etc.

3) High Rock- I know what your thinking why make another snow game... because really they didnt do so hot on the whole skyrim is made of snow thing most of it reminds me of a hot spring it rains... you would think it would snow all the time being so much north that all rain was snow.In high rock make it like the snowy parts of skyrim and blizzards and such.I was hoping they would (bethesda) beacuse they put so much non cold climated weather like they have forest that are very green and not snowed in.

if you think about it elswyr would be a great place or summerset because if you look at the game map in the link section then you would see beacuse the terrains of the 2 are very simalar but also different but they havent been "un-earthed" by us gamers making it a great place to start a kinda new feel to sand terrain.

The thing i want most changed of all is gameplay and events being like if it had rained then the roofs of houses would have streams of water coming off of them and have ships but when you travel on the ship it can get attacked by bandits or a monster beacuse the 1 thing i hate is the black screen (or loading screen) i want to cut that out and make it where like if you are traveling by carriage it actually shows you riding the carridge and you could get attacked by monsters the carrige could be getting robbed or bandits trying to take your things and the carridge driver would either reward you or make the ride free and give you gold back and also you could possably get quest from the driver and another thing is the NPC's AI are still very un-educated it's so stuipid to hear about the same quest you just did for a NPC and they act so astonished and they dont even know you did it like for example you just kill the main questline guy right and this chick says : did you hear so and so died and your like i know i did it and you cant even tell here and they say it all the time.and i want it to go into further detail of your fame or infamey and the events you choose in the game affect the main story and add multiple guilds such as in oblivion ES 4 the blackwood company and the fighters guild make it to were there are muilple guilds you may choose from like EX: the elven fighters .<... but make it like that for all guilds and make them spread out across the contenint and you can say join one guild to get a quest to ruin the other for a large sum of cash and im not talking 300- 500g like 2000-3000g and have the option of making your own guild to gain lots of fame and reputation to effect the main story line and make it to were you cant just walk into the castle you have to get invited or have a amount of fame for entry for EX: your talkin to a guard and the guard says Guard: Halt! you do not have the access to go into the castle. and your options are :

1) Let me through or i'll cut you down were you stand!

3) (if you have invation) Here is my invataion now move aside.

That would be awesome.Giving the player so much felxablitly and choice in there coversations and make to where you could chose sides in the main story but it affects your fame and infamay just as much a bad deed like killing a person so you could still commume with people and others to see your goods and services but, if you had a certain amount of infamey than that person wouldn't like speaking to you and you would have to use your persasion to get them on you side.... at this point at 9:36 i had my brother come in and read this article and give his opion and things he would add such as :
Bringing back the arena and make it to where it takes like 3 days real time to beat the arena and make it to where you can fight at anytime not 1 a week atfer you win all matches and you fight giant orges not just humans (races) but like monsters or creatures to and make it to where monsters attack the town and atcually do damage to the town and you can help rebuild but like a 5% chance of it happening so you dont have to repair wall like every time you come to town and get money for your labor and rewards magic items etc. and more flying creatures not just hawks and dragons but like giant birds (cant tame) that swoop down and try to pick you up and make the controls more fluient like you can roll even though your sneak skill isnt lvl 70 i mean we learned how to roll when we were 2 years old and good god make the jumping animation better it sucks still >.> and i have ran into this problem in skyrim if you walk into objects laying on the ground they go flying and make it to were you actually have to buy a bag to store items in and until you do all you can carry in like 50 lbs like arrows and a sword or a 15 lb spear and you pick up items with your hand not with the who the heck knows the air i guess>. i am done. hope you like my opion thanks if you read this far i spent 2 and 1/2 hours typing this.links
:
:
V