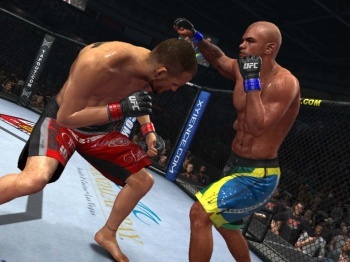 Back in August, Red Dead Redemption [http://www.thq.com] came out just one week ahead of UFC 2010. "We're absolutely not walking away from the brand," he asserted, and while his remarks had a ring of bravado, it turns out that he wasn't just talking through his hat.

THQ announced today that it has extended its licensing agreement with the UFC through 2018. "We're very excited to extend our relationship with Zuffa and the Ultimate Fighting Championship [http://www.ufc.com/]," said THQ Executive Vice President Danny Bilson. Along with conventional console releases, he said the company plans to broaden the franchise to include "social, mobile and brand extensions." The deal gives THQ the right to make Ultimate Fighting Championship videogames for all current and next-gen consoles, PCs and handhelds, along with "certain social media and wireless rights," including the iPhone and iPad.

But 2018 is a long way off and getting there depends on THQ's ability to turn the property into a viable money-maker. EA Sports [http://www.amazon.com/UFC-2009-Undisputed-Xbox-360/dp/B001D7T2XA/ref=sr_1_1?ie=UTF8&s=videogames&qid=1287530798&sr=8-1] machine behind it. THQ has locked down the UFC, but whether it can do the same with the MMA videogame genre is a whole different question.

That is if it sold that much.

Sports games, not my cup of tea, but I think the "online pass" thingy is the reason it sold bad =/

I love how the screenshot perfectly highlights the clearly displayed UFC logo on BOTH fighters' hands.

Make the fighters fairy princesses, include katanas and rocket propelled chainsaws, and include modes where you must fight to the death while various things rain down on the ring. Suggestions: veal livers, cans of vegemite, or perhaps showers of slinkies.

I tried to play the 360 demo. Man, all these modifiers and buttons confused the shit out of me. First time it ever happened to me as a gamer and ugh, put me right off. Deleted the game and never looked back once, not for me apparently.
K